Railroading In The Open Water 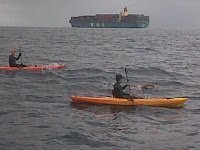 Ky Hurst does it as well as anyone on Earth. Gerry Rodrigues uses it to his advantage every time there are ocean swells, large or small. Penny Palfrey does it as second nature on her crossings. Julie Bradshaw does it butterfly. FINA World Cup champion Chad Ho is an absolute master of it.

Railroading (verb): To use the power of ocean swells going in the same direction as a swimmer. As the ocean swells build up behind and beneath the swimmer, the swimmer increases their kick and their stroke rate, sprinting in conjunction with the power of the swell to gain an incremental boost from the swell power and direction. As the swell passes the swimmer reduces their kick and stroke rate back to their normal cadence. As she turned the final buoy and headed in to shore, the swimmer railroaded the final 200 meters and caught a wave in the impact zone, passing ten of her competitors at the finish.

Another term from the ever-expanding English-language Open Water Swimming Dictionary.