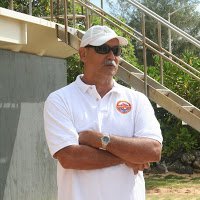 Ralph Goto, Administrator of the Ocean Safety and Lifeguard Services Division of the city of Honolulu, was selected as the 2012 Paragon Award recipient in the category of Water Safety. The prestigious award, given by the International Swimming Hall of Fame, is presented annually to an individual for outstanding service and contributions in aquatic disciplines and safety around the water.

There are dozens and dozens of ocean swims, biathlons and triathlons on the island of Oahu throughout the year. Each of these events have well-trained lifeguards and experienced safety personnel overseeing the athletes who participate in the events on the north and south shore of the City & County of Honolulu.

A remarkable professional, he has been in charge of Honolulu’s Ocean Safety and Lifeguard Services Division since 1981, the year that the Hawaiian Ironman was still held on Oahu.

With the growth of the population, visitors and events, one of the icons of the global lifesaving community has overseen tremendous growth in the division from a budget of less than US$1 million in 1981 to over US$9 million in 2011. Ralph provided support for the development and formalization of the Personal Watercraft Rescue program in Hawaii which is currently being used worldwide. He also organized the formation of the Hawaii Region of United States Lifesaving Association in 1983 and now President of the Pacific Islands Region. He has hosted 1983 World Lifesaving Interclub Championships on Oahu and the International Life Saving Federation meeting in Honolulu, and served as coach of the World Lifesaving Team in 1985.

His network is global where he maintains relationships and shares information and world-class lifesaving systems, protocols, policies and procedures with his counterparts in throughout the United States, Australia, New Zealand, Hong Kong, Japan, France, Germany, Brazil, Spain and Portugal.

In 2007, the City & County of Honolulu selected Ralph as its Manager of the Year and recognized his “outstanding skills, knowledge, abilities, and professionalism in championing the cause of lifesaving worldwide and his personal and professional support of U.S. Lifesaving Association” and acknowledged that Ralph was “the driving force behind the professionalism of the Hawaii Lifeguards, not only in the City and County of Honolulu, but throughout the state of Hawaii. His style of leadership and collaboration has done wonders in creating a network of professionals across the state and his opinion and ideas are sought by colleagues here and abroad. As a collaborator, he spearheaded a cooperative effort between the University of Hawaii school of Ocean and Earth Technology, the Hawaiian Lifeguards Association, and the Ocean Safety Division of the City and County of Honolulu. Information is now available in real time for both visitors and residents alike, so that they can safely choose their beach activities and have a great time at the beach while avoiding potential hazards.”

Overseeing a full-time staff of 155 water safety officers and 70 part-time lifeguards throughout beaches on Oahu, the Life Member of the U.S. Lifesaving Association also created a robust non-profit group to support lifesaving and educational efforts across the state and create a network of community supporters. Through this nonprofit organization, he has provided direct support for youth education and training, prevention efforts and participation in international lifesaving and education of public and private decision makers in Hawaii.

His prevention work has lead him to present drowning research at the International Life Saving Federation in 2006 and the World Congress on Drowning in 2001. He has written chapters in books on drowning prevention, serves as a reviewer for national publications regarding open water lifesaving and serves as an expert consultant to the Centers for Disease Control and Outbreak in the United States.

Without a doubt, numerous lives have been saved because of the programs Ralph has helped develop – truly the greatest tribute to a professional lifeguard.