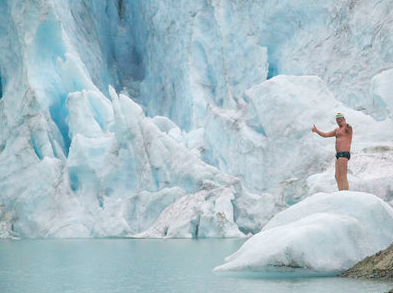 South African Ram Barkai was one of the inaugural honorees of the Ice Swimming Hall of Fame.

It is no surprise that Barkai was recognized as an Honor Swimmer and Honor Contributor – Administrator by the new organization founded by several luminaries in the ice swimming community, led by Ned Denison and including Paolo Chiarino, Elaine Howley, Pádraig Mallon, Leszek Naziemiec, Kieron Palframan, Shelley Taylor-Smith, and Jonty Warneken.

Barkai and a hardened group of fellow South Africans, formalized the sport and established the International Ice Swimming Association in 2009 for those adventurers who wanted to compete and challenge themselves in bodies of water without a wetsuit in water 5°C (41°F) or less.

He first started to promote the Ice Mile and then expanded to the Ice Kilometer, Ice Sevens and the World Ice Swimming Championships.

Barkai’s dual honor was due to his extensive and comprehensive activities and achievements in the sport: