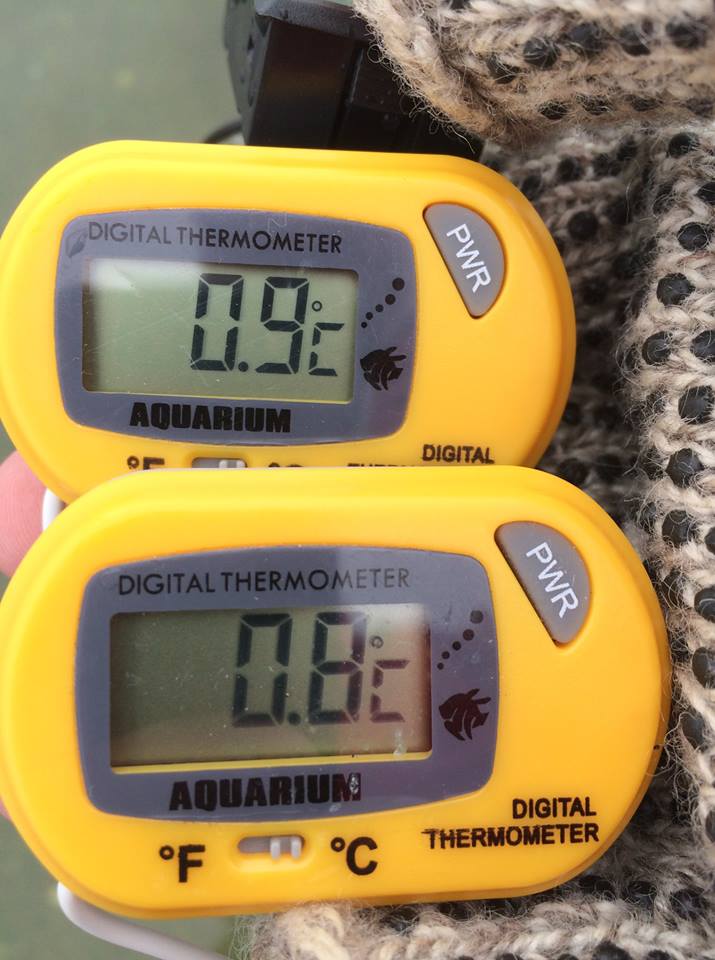 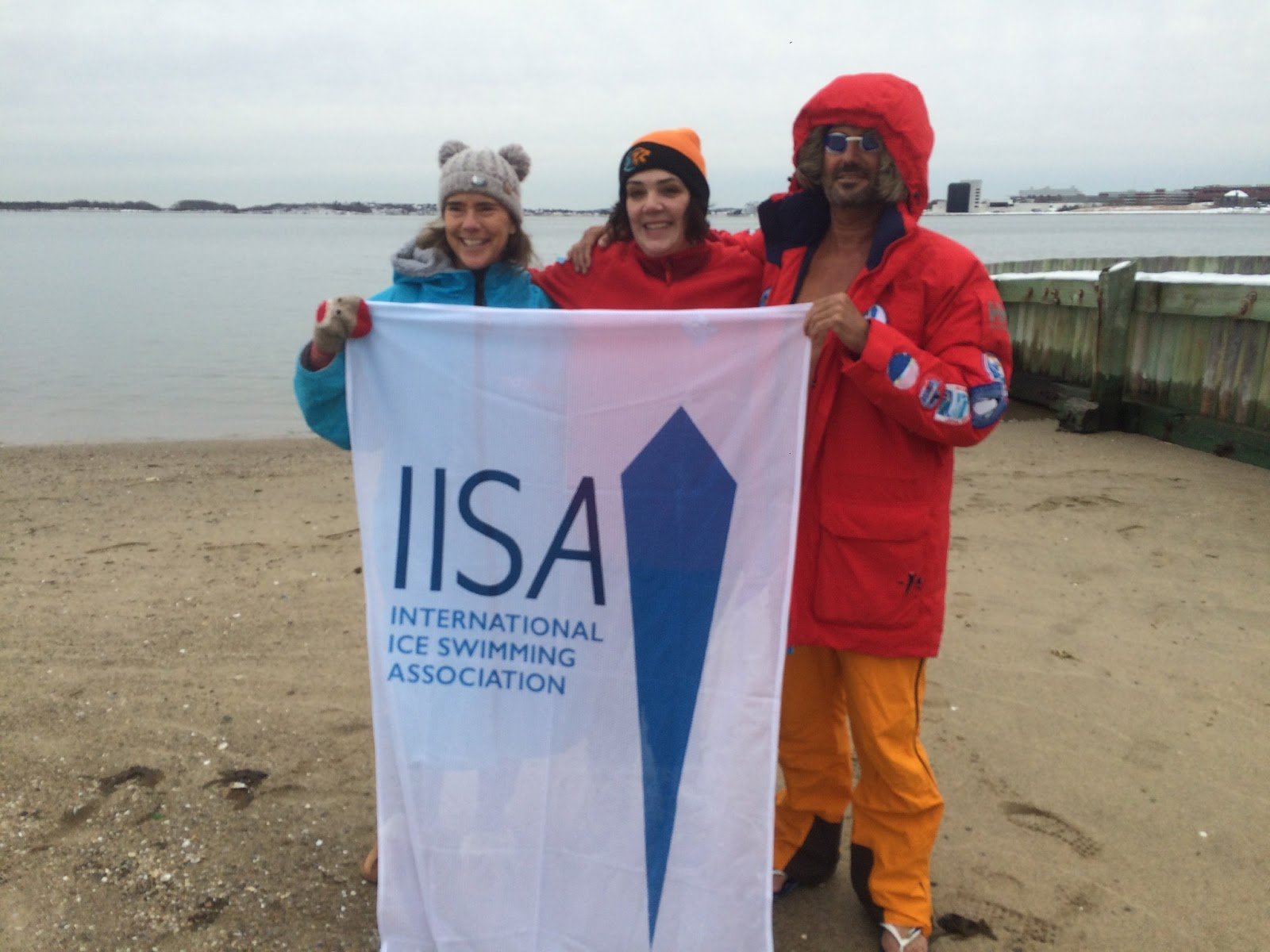 Barkai nearly missed this opportunity. “I planned to stop in Boston for an Ice Mile attempt on route to Vermont, Massachusetts [for the Memphremagog Winter Swim Festival].

Last weekend, I swam the Midmar 16-mile event, although I had to sit 2 miles after an asthma attack during the 12th mile. I got back in and finished it, vowing never again exactly like last year. [Then] I was hit by a nasty stomach bug, on a tour in Cape Town.

I nearly missed my flight to Boston, seating in the men’s room seeking relief.

Aside from losing 2 kg, I also hadn’t done much acclimatizing this season, aside from a 1 km stint in -1.2°C water in Antarctica last November. South African cold water is great training ground, but nothing beats a regular, not-too-frequent training in European cold waters. Coming from a daily air temp of 25°C to 30°C+ to this sub-zero air and close to zero water, takes some adjustment. I didn’t sleep much since I arrived

While Barkai may not have been at 100% optimal levels, Demeo was. Barkai recalls, “Rena has organized the beach, the support team, an ambulance, a doctor and few local frozen ones to support me. Elaine Howley was in charge of recovery. Greg O’Connor was my second in a diving suit. We had to move to the Family Beach as the women support team were not allowed to be on the Men’s Beach while I was swimming. The beaches are separated by large wooden fences and the swim length between them is called a Fence.”

Barkai swam in very shallow waters. “Basically I could see the sand all the time, almost able to touch it. Greg was walking in the water few meters from me. The first few Fences were very hard, as usual for me. I finally got my breathing right. I felt that the water was not far from 0°C. It has that severe bite I’ve felt many a times.

I was counting my Fences and I agreed with Greg that after 12 Fences, he raised his hands, ten fingers, meaning 10 Fences to go. It was a very hard swim, but I was going at a steady pace, 63 stroke per minute consistently.

At some stage towards the end of my swim, I could feel I was taking serious strain. Vision wasn’t great which is always the case. I could see Greg and everyone yelling and waving, but it happens in every swim, I never know what they are all on about. I just swim.

I was counting and I was sure I was 100% on target. I saw Greg waving his hands, and since I was on 10 to go in my mind, I saw 10. I carried on swimming. I was on the 17th length with my counting. I suddenly felt I had nothing much left. I started my 17th length and realized, I have maybe one length in me, but not six

Barkai swam to the beach and raised his hand. Greg came running towards him, but Barkai doesn’t recall anything after that moment. “Once I decided to abort, it was over.”

Barkai was helped inside, walking barefoot on the snow into the nearest building. “They set me down, covered me with blankets while I was bracing myself for the roller-coaster recovery ride.”

But Barkai was in for another unexpected surprise. “They told me I aborted 50 meters from the end. WHAT?!? I thought was on the 17th fence.”

It turned out that Barkai was on his 22nd Fence – his last Fence. It was a 1650 meter course so Barkai aborted his attempt only meters from a true mile. “[I was] butted. Yet, that’s life,” said Barkai. “It was my fault, my decision. I am still perplexed. How did I manage to lose 5 lengths of 75 meters each in my counting? I did zone out several times, to maintain my focus. Lesson to be learnt.”

Barkai’s rewarming process was also a lesson to be learned by neophytes in the ice swimming world. Barkai recalls, “The team was fantastic, support and recovery. Apparently, I was quite belligerent in recovery and wanted to get on with it my own style of recovery. [But] Elaine wouldn’t have it. The doctor was worried about my behavior and decided to prick my finger and test for blood sugar. I was 100% fine.

I only know about that because I was told at the pub [later]. 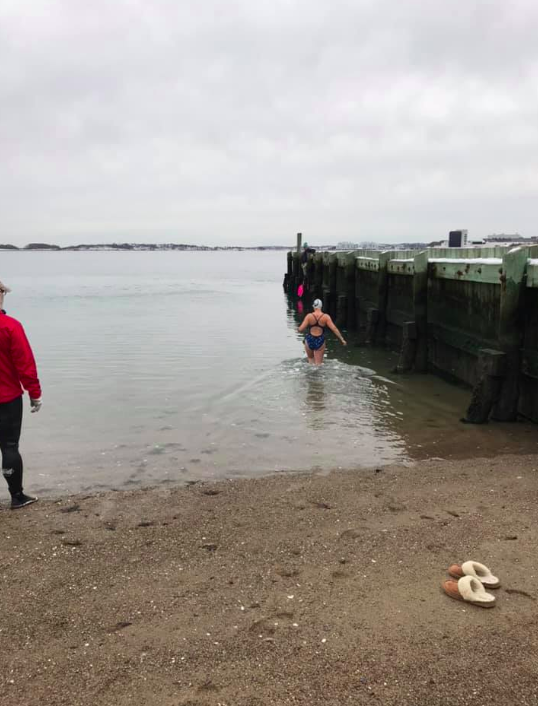 I am known to be belligerent in recovery. I usually give strict instructions such as ‘don’t touch me’, ‘don’t help’, ‘I do it my way’.

I was in the chair in the hall and all I wanted was my shower. I always recover with shower. [But it is] not acceptable by many; it works for me and apparently Lynne Cox all the time. I never go to the shower alone, starting with cold water and every few minutes tap it up until it is too hot, time to get out. I kept on asking Elaine to go to the shower, she heard ‘SHOPs’. She kept on asking me what I want from the shops. I thought to myself, ‘What is wrong with her? Why does she keep on asking me about the shops?’ Lost in translation

Martha Wood went to swim after Barkai. The local swimmer spent 26 minutes in the water, completing 18 of the required 22 Fences. Barkai described her attempt, “It was a tough swim near zero, a massive effort.”