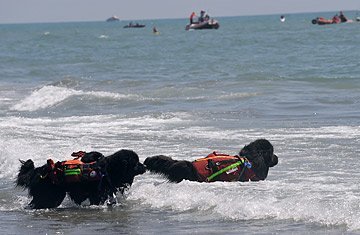 There was all kinds of excitement on Ostia at the 2009 FINA World Swimming Championships where hometown hero Valerio Cleri and German standout Angela Maurer won the 25 km marathon swim.

While Cleri was comfortable in the rough waters of Ostia, not everyone is water safe in the Roman seaside resort where not all of the lifeguards are humans.

Under the guidance of the National Civil Protection Agency, a group of 70 Labradors, Newfoundlands and golden retrievers help serve as lifeguards and patrol the shoreline along with their human counterparts. They start training when they are puppies and learn to spot humans in trouble, paddle out to them and allow the swimmer under duress to grab them. The dogs then paddle to safety with the human and can even drag up to 3 people up onshore with their teeth.

Rambo and Romeo, two Labradors, and Massi, a Newfoundland, have helped victims.