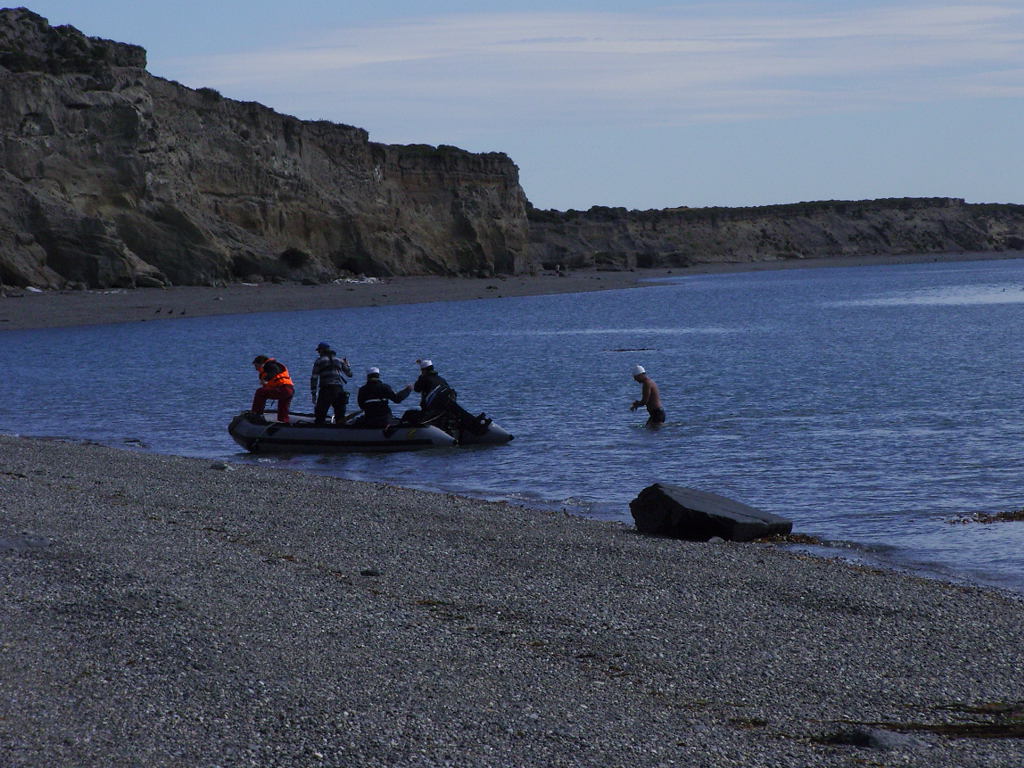 Randy Perkins, also known as Conquistador is an American open water swimmer who crossed of the Strait of Magellan on January 20th this year. The water temperature ranged from 36.5-41ºC (2.2-5ºF) where he faced currents ranging between 11-17 knots while being escorted by Pedro Ordenes of Water World Swim to Tierra del Fuego, Chile.

This is his story:

“It’s quite the journey to go from Seattle, Washington to Punta Arenas, Chile. It took about 17 hours of flying through Dallas-Fort Worth, Santiago and five time zones with arrival into Punta Arenas at 4:30 am. I was told the LAN pilots selected to fly into PUQ are the best in the fleet due to the challenging cross winds and unpredictable weather seen in that region. I should have known something was up when the flight attendants served drinks with attached lids. A surprisingly small number of Chileans speak English, but all are extremely friendly and helpful so getting around was not a problem.

The town of Punta Arenas is the jumping off point for many traveling to Patagonia and filled with things to see and do. My first order of business was to kiss the foot of the Ona Indian statue in the center of town which is said to bring good luck.

There are a wide range of lodging options in Punta Arenas and since I wasn’t planning much time in the room, I just went with a small hostel a few blocks away from the center of town.

Safety is always a priority when doing this type of swim. I was surprised at the level of detail the Chilean Navy group required to allow a skin swim attempt of the Strait of Magellan. Prior to my departure from Seattle, I needed to provide details of my physical check-up as well as written approval from a specialist saying I could endure up to 90 minutes in the 36ºF (2.2ºF) water. After arriving into Punta Arenas, I had a follow-up physical with a Navy physician to confirm what my doctor back home had said.

The following day, we traveled to Punta Delgada for the attempt. The Navy captain had originally set our start time for 2:00 pm, but was checking with the local ferry pilot on conditions from the Patagonia side and decided to delay until 3 pm. Our primary safety boat was a specialized 50-foot Navy frigate designed to drive directly onto shore and extend a set of stairs to allow easy entry and egress under extreme conditions and was generally positioned mid channel. My following zodiac was staffed with a medic, the pilot and two navy swimmers and was always within 10–20 feet of my position.

The swim briefing discussed general conditions of the Strait and suggested a calm swim start on the north shore in water expected to be in the mid-40sºF (7ºC) for the first 1.5 km, then a 1-kilometer section containing the fastest current and coldest Antarctic flow expected to be in the mid30sºF (1.6ºC), followed by a fairly easy last 1.5 km on the Patagonia side.

How does the saying go, “The best laid plans of mice and men…?”

The shoreline was covered with upwelling and small whirlpools. I immediately encountered 38ºF (3.3ºC) water temperatures. This had me concerned at first, but I realized it was just a localized temperature in that section of the Strait and likely due to the upwelling. The conditions of the Strait on this day had divided the cold center channel into many smaller sections which helped me manage the cold.

At an hour 15 minutes into the swim, I sighted the big navy boat on shore and felt I was no more than 5-10 minutes from the exit. But I didn’t realize the current had picked up and it would be almost another 30 minutes before I would reach the Patagonia side. The pilot on the zodiac had me give the OK signal with much more frequency during the last 30 minutes since the cold was really starting to take its toll on me. I was beginning to struggle with my swim form. Both calves were cramping as well as my right forearm and I could feel my core [body] temperature dropping to the coldest I’ve ever experienced.

At 1 hour 40 minutes, I made it out of the current and into a somewhat protected bay with temperatures in the upper 40sºF (8ºC) that felt like bath water to me by this time of the swim. I exited the water at 1 hour 43 minutes under my own power. I was very surprised how good of condition I was in. There was a little shivering, but I able to stand on my own and speak in somewhat coherent sentences. I had been swept about 1 kilometer down current from the where the navy boat was waiting and exited onto an empty shore. Within a few minutes, the navy captain, the Governor of Patagonia, and Pedro Ordenes who coordinated the swim through Water World Swim in San Francisco arrived with a contingent of navy personnel, enthused locals and media.”

Perkins looked back on his crossing and compared the Strait to his home waters of Seattle, San Francisco Bay and the Strait of Magellan:

“Of course, the biggest difference was the water temperatures, but other than that, the swim was very similar to an Alcatraz crossing, but just on a bigger scale. We prepared with over 10 Alcatraz crossings in everything from flat calm water in 30 minutes to super rough chop and ripping currents where no one was able to make it into Aquatic Park. The water temperatures in San Francisco were not quite cold enough for the needed conditioning, but the Seattle Puget Sound provided a good 5°-10° lower water temperature and more importantly the 30’sºF (1-3ºC) air temperatures needed to truly chill ourselves.

Both areas had a good influx of colder fresh water to bring the temperatures down a bit and experience that little bit less buoyancy expected in the Strait from the Antarctic fresh water melt. During the final month of training, our group would go out when the weather was particularly bad or especially cold in Seattle just to prepare for the worst possible conditions I could expect in the strait. The conditions in the Strait on the day of the crossing is undoubtedly the reason I was able to survive for so long in that water. It was the warmest January 20th in the last 131 years (with a 72°F air temperature) and the water was very flat considering the typical 3-5 foot swells we saw the very next day in the Strait.”