Ray Gandy was announced as a 2010 inductee in the Rhode Island Aquatic Hall of Fame and will be honored at the 29th annual induction banquet this Friday at the Quidnessett Country Club in North Kingstown.

Ray became the first person from Rhode Island, the smallest state in America, to cross the English Channel.

His daughter was part of his support team and swam the last 100 meters with him. “Having my daughter in my arms on the beach in France was a moment I will never forget. 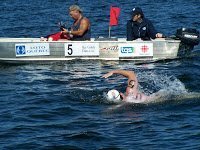 In a news interview of his 13 hour and 47 minute swim, Ray said, “I’ve given up a lot of weekends with my family during 40 weeks of intensive training. I was suffering from severe leg cramps and exhaustion. My feeds were very tough. I ingested a lot of sea water through the swim and had nausea. At one point all I could hope for was a successful single crossing, knowing that I was representing our great little state.”

Besides Gandy‘s Channel crossing in August 2009 which he raised money for the Leukemia and Lymphoma Society of Rhode Island, Ray has participated in all kinds of open water competitions, from the professional 34K FINA Open Water Swimming Grand Prix race in Lac Memphremagog (see photo above) and the 1.7-mile Save the Bay Swim in Newport, Rhode Island to the 8-mile Lake Champlain Swim, 25K Swim Across the Sound, 24-mile Tampa Bay Marathon Swim, the 2007 25.5-mile Lake George and the Boston Light Swim, the 10K Flat River Reservoir Champions Challenge (see upper photo) as well as 15 Top 10 U.S. Masters Swimming swims.

The Rhode Island Aquatic Hall of Fameis located at the Smith Swim Center at Brown University.