Really Fast Fun And Fabulous Prizes With The Flowers

There are certain swims around the world where the joy, the excitement and the beauty of open water swimming is epitomized. The Flowers Sea Swim is one such extravaganza where swimmers are treated to this and much more.

At the 18th annual Flowers Sea Swim looks to be even better – and richer – than ever where the pure speed of pool swimmers meets the ocean savvy of open water swimmers.

It is going to be a fast straightaway sprint parallel to 7 Mile Beach.

While these men will be vying for the US$25,000 cash award will be given to the swimmer who breaks the record for the world’s fastest recorded ocean mile and US$5,000 is awarded for setting a new event record. The goal times are 16:00 for the men’s world record and 17:20 for the event record. The women – who we will highlight tomorrow – will aim for the world record of 17:21 and the event record of 18:13. With a favorable tide helping the swimmers on Saturday, there may be two swimmers who will earn a nice payday for their efforts.

But the generosity of the Flowers family extends to all swimmers. 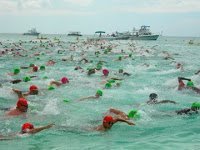 The Flowers Sea Swim is – bar none – the world’s richest open water event with over US$100,000 in cash and prizes. Swimmers are guaranteed an incredible 1-in-5 chance in winning prizes including airline tickets to Los Angeles, London, Toronto, Brazil, Dublin and Australia, jewelry, cell phones, and watersports, fitness and dining vouchers, and a Caribbean Cruise – and a great goody bag for all.

Enjoy one of the world’s greatest open water events.