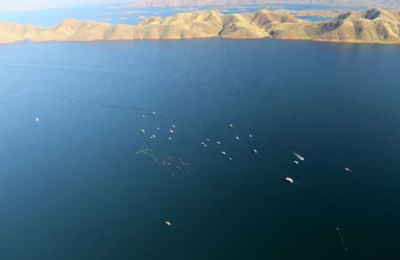 The Lake Argyle Swim, held in Western Australia, only took 2 hours to sell out. A record number of team (99) and team members (423 swimmers, paddlers and pilots) will participate in the 2016 event.

Event Manager Glenn Taylor said, “It is great to see returning champions coming back to defend their 2015 titles including Five River Swimmers (10 km Duo team), Aquaholics (20 km Quad team) and Same Olds. Also welcome back our perennial bridesmaids in the 20 km Quad team race, the Burleigh Boys. We all hope they get the job done in 2016.

There are also many familiar names including local stalwarts Sooty Grunters, Charlie’s Angles, Croc Bait, Vintage 71, and many more.”

The historical growth of the event: