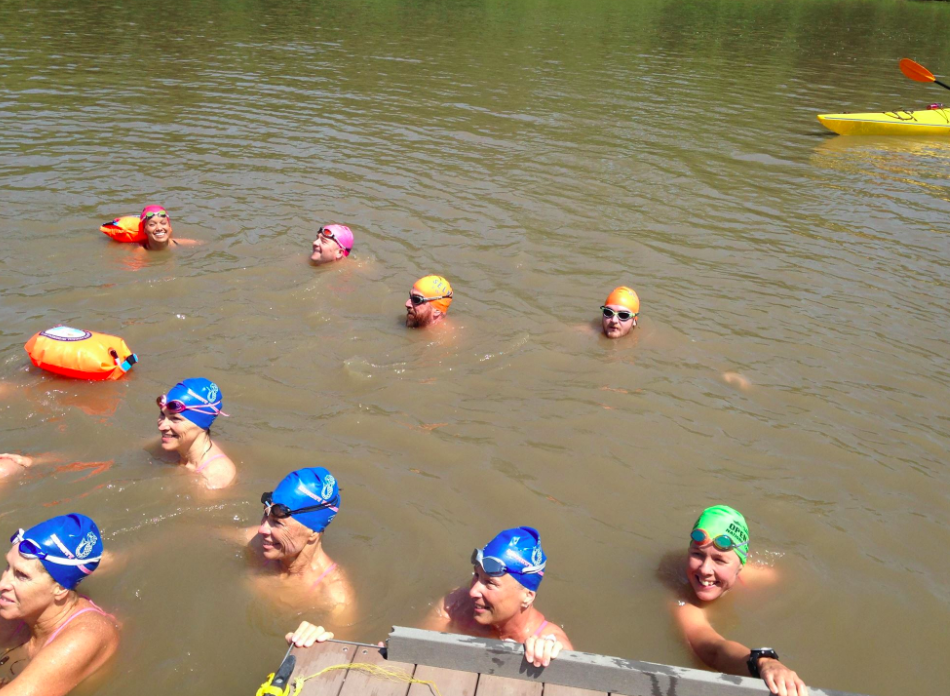 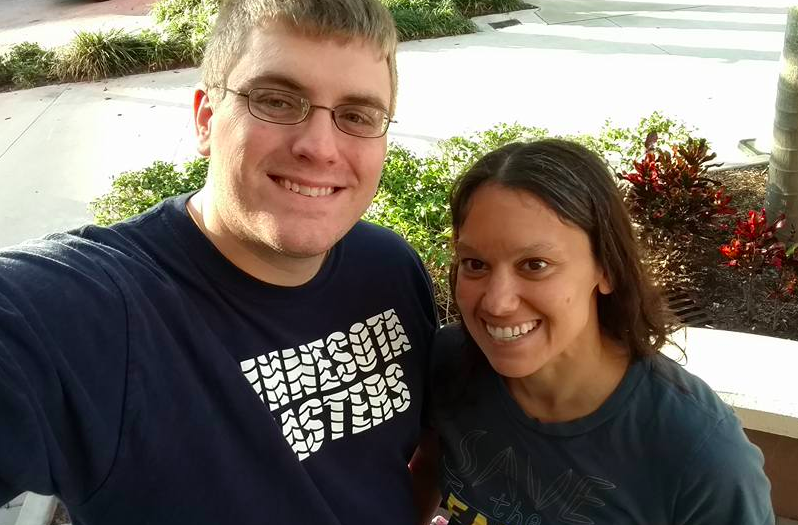 Sandra Frimerman-Bergquist swam along the Red River flowing between the U.S. states of North Dakota and Minnesota for 9 hours 40 minutes in her sixth career END-WET river swim.

The 34-year-old talked about her END-WET swim:

Daily News of Open Water Swimming: You swam extremely well yesterday, beating some veteran marathon swimmers like nearly an hour. Can you describe the swim from start to finish?

Sandra Frimerman-Bergquist: I think that my past experiences in swimming prepared me to swim with more experienced and faster swimmers. I grew up swimming on a team of very fast swimmers that I looked up to and had to compete against.

We arrived at Belmont Park at dawn. After putting on some of my favorite music, we start prepping for the race. I put on bug spray, sunscreen, hit the bathroom, put on my suit (NG1 that I wore in the 2016 END-WET), put my end racing cap on, apply Vaseline and since it was still pretty dark, I put my mirrored goggles in the kayak and grabbed blue ones.

After about 10 minutes, we got the 5-minute warning to start. After 10 minutes, there was a last call for any swimmers and “3-2-1” with a siren start. We all waded in slowly before getting swept away in the 4,300 cfs [cubic feet per second] current at that point. The swimmers go first and the escorts catch up later so the swimmers get as much daylight (time) to finish the race.

For the first hour or so, Stephen Rouch and I swam together until his escort could catch up to him. We swam together for a bit. I just kept relaxed and knew that I had done the training and can trust my body to make it to the Thompson Bridge without getting tired. I focused on my strokes and body position to put minimal stress on my body. I was all smiles by the time I got to the first checkpoint (Thompson Bridge).

I knew that I could finish; it was just about how long it was going to take me and how much it would hurt. In the back of my head, I knew that the big-time veteran swimmers can come back hard. So I was sure to not doddle too much. I was very happy that I spent time going over the map and knowing how many left and right turns as well as straightaways are in each portion of the swim.

Those middle 12 miles were the hardest portion of the swim. I tried out a new feed at this time and it did not go down too well. You live and you learn.

However, there were bald eagles and beautiful landscape to ground me that brought me back into the moment. The river is winding, the wind is blowing, you actually swim south as some points, as the river bends.

Once getting to “12 miles to go” (24 miles completed), we started to think that I maybe could actually break 10 hours. I didn’t even notice the last chance checkpoint. At the next feed, (kayaker/husband shown above) David said I had just over 5 and half a miles left. Well, he misspoke and meant to say 6 and a half, but I was back to swimming before he realized his mistake.

I am proud of myself for taking out the frustration of seeing the number 6 on the water just after he said 5 and half. We didn’t mention it until the drive back to Minnesota.

Once we got to Lincoln Drive Park boat ramp, I slowed down to take it all in. The sun had started to come out, and the river was cooling off because of the other smaller streams flowing in. I was so happy I didn’t want it to end, but then we went under the first traffic bridge in town and within 15 minutes we were done.

The race director gave me a dog tag with 111 for each of the 3 consecutive wins, he said. This race is unique in that each time the race is finished by a solo swimmer, he/she is given a “dog tag” finisher medal with the number of times the race was completed. So until this year, the race had been finished 110 times, some by multiple individuals. The race director asked how it compared to the other years, and I was actually thinking about that during the swim. Each year it seems to hurt less and I learn more about how hard I can push myself physically and mentally.

Daily News of Open Water Swimming: Where do you normally train? How many days per week? Does anyone coach you? What are some of your longest and toughest workouts (in the pool or open water)? What are your “go-to sets” in the pool?

Sandra Frimerman-Bergquist: The majority of my swim training comes from Hopkins Masters at Eisenhower Community Center and Hopkins North Junior High, both in Hopkins, Minnesota. For my out-of-water training and afternoon swim workouts, I go to the Southdale YMCA.

In the summer, I swim at a Couples’ House who open up their home on Monday evenings and Wednesday mornings to triathletes, Ironman trainees and open water swimmers, every summer weekly for 1.2 – 2.4 mile swims done in 0.6 mile segments. It’s a great way to give back and hang out with like-minded people. I will also go to a different YMCA to do long course training in the summer across town for my afternoon workouts.

I normally swim 6-7 days a week and about 12 swim sessions per a week.

The masters program I swim with is coached by Scott Tripps. He and the other coaches have a lot of experience as swimmers, coaches, and people. I also have a personal trainer at the YMCA who I work with once a week. Michael Kane who has helped me with cross training and weight-lifting and overall fitness.

My husband does a lot of coaching of me because he sees me swimming the most either at practice while waiting or coaching an extra hour for me to swim or at the afternoon swims. I do 2 one-hour 4000-yard practices in the morning. Instead of one practice being extremely hard, our practices are more in phases. And a practice is only as tough as you make it. If I am swimming alone in a pool, I try to go for my long swims or repeat the practice from the morning with some alterations. I also frequent hula and other dance classes at the YMCA for some variety.

Daily News of Open Water Swimming: You have done many open water swims in your career, but you always do well in END-WET. Why do you think that is?

Sandra Frimerman-Bergquist: Actually, I did not finish the END-WET in 2014. That swim taught me a lot about open water swimming as does each DNF.

My main focus is to enjoy myself during these swims. I want to take it all in and remember each part of the swim. So, I train so it doesn’t hurt to the point that it isn’t fun anymore. I enjoy swimming in rivers and having studied rivers and water in college, I enjoy exploring how my swimming is affected by how the river flows. I think that I use END-WET as a baseline to see how I am doing not only in swimming, but in life. A lot of these long swims are mental and the training is mental. Having anxiety and depression prepares me for the actual swim because I know what to do if something changes. I already have a plan in action. I think I train hard to do well, not just finish the event. However, I am starting to think I just slow down at a slower pace than most


Daily News of Open Water Swimming: What and when did you eat and drink during this year’s END-WET?

Sandra Frimerman-Bergquist: I feed every 30 minutes with the option to wave off the first. Every feed has two liquid choices and I usually alternate between the two. Each has 25-30g of Maltodextrin (carbohydrates) and either a Hammer FIZZ or Nutriboost by P2Life.

The Nutriboost is especially helpful on longer swims because of the protein and vitamin/mineral ingredients. Depending on how I am feeling, I will take a gel (Gu, Hammer, Cliff, Power Bar or other) every hour or every hour and half. I continue this until the race is over, even if I have a feed a few minutes from the finish because it is on schedule.


Daily News of Open Water Swimming: The Red River turns left and right as it meanders from North Dakota to Minnesota. Does your kayaker take you down the middle of the river or do you take straight-line tangents between the closest points in the river?

Sandra Frimerman-Bergquist: Since my husband is my kayaker, I will let him answer this one.

David Bergquist: Because I have now escorted her on this part of the river 2 and half times, I ‘know’ the course. For the first 6-8 miles, the rivers current is flowing the fastest it will be all day. For these 6-8 miles, I do sometimes ‘chase’ the current. It is most visible during this stretch of the river, but we mostly just stay in the center of the river. The river water can be very stagnant at most places near the river’s edge, so taking sharp turns around the bend can actually slow the pace because of the way the water flows around corners in rivers.

Daily News of Open Water Swimming: What was the water quality and temperature this year? What was it compared to previous years?

Sandra Frimerman-Bergquist: The water quality was better than the past two years, but the same as 2012 and 2013. I feel it is a very clean river that tastes and smells fresh; it is just very silty and muddy.

There was a good amount rain the week before that helped increase the flow and wash away any stagnant water. The Red River is dirty in the only aspect is that there is a lot of suspended solids that make it look dirty. The temperature was higher (around 74°F) than the previous years (around 71°F), but not as warm as 2012 and 2013 on the 27-mile course. The river was faster than the past two years (2016 and 2017), but slower than the two years prior (flood years 2014 and 2015).


Daily News of Open Water Swimming: What is next on your agenda?

Sandra Frimerman-Bergquist: This coming weekend, I am swimming in our local Lake Harriet 1 and 2 mile Swims and the Minnesota Masters long course [pool] meet.

The next big things left on my schedule include In Search of Memphre in July [in Vermont], our local Lake Minnetonka 5-miler, Point to LaPointe in Lake Superior. In August, I am attempting 20 Bridges Manhattan Island circumnavigation [in New York]. In September, I am going back to the 19.3 km Swim Around Charleston [in South Carolina] that I did in 2017 and loved it. In October, I am returning to 16 km Swim The Suck [in Tennessee]; it is so great I keep coming back.

There will also be a few shorter local races in Minnesota, Wisconsin, and Iowa that I will swim this summer as well.