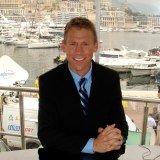 His versatility on television (announcing 50 different sports) is similar to his reach in the open water: his skill easily adapts from surf skiing to surfing, from sprinting to paddle boarding.

And his hard work and healthy lifestyle has saved him in another realm.

The former Uncle Toby’s Super Series professional life saving competitor has taken to cycling. He was training on his bicycle when he got in a horrific accident riding up the hills in Southern California. A car swerved inexplicably across three lanes of traffic and smashed into Hummer. Lucky to be alive, he was hospitalized for a week and bedridden for another month due to 3 pelvic bone fractures and surgery on his wrist. “The driver cut across 3 lanes of traffic in the space of 3 cars, and made a right turn in front of me and I went flying over 50 feet in the air at 25 miles per hour.“

Fortunately, like Glen Christiansen who is also facing rehabilitation due to a terrible fall, Hummer’s healthy lifestyle, positive outlook, and years of training prepared his body and mind to enable him to recover like the champion he once was in the open water.