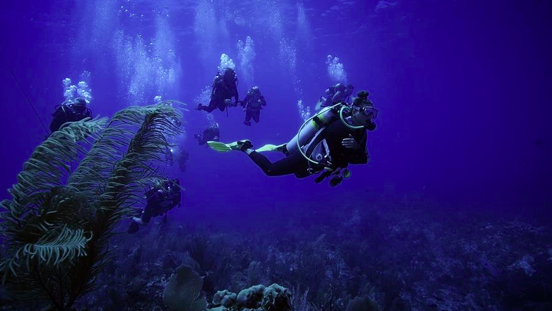 Jim Ritterhoff, co-founder and Executive Director of FORCE BLUE, reported the following activities and achievements of his innovative program that he started with Rudy Reyes.

FORCE BLUE give military veterans a chance to learn about and explore coral reefs, one of the most critically endangered ecosystems on the planet, and to adapt their training and teamwork to aid in its protection.

* Completed a coral restoration mission to Puerto Rico with partners, including National Oceanic and Atmospheric Administration, National Fish & Wildlife Federation, the Coral Restoration Foundation and The Ocean Conservancy
* Established a prestigious Dive Control Board
* Finalized a FORCE BLUE Diving Safety Manual and received FORCE BLUE Scientific Diver Accreditation
* Completed three campaign videos in collaboration with Sea of Change
* Revamped its website including an online store for the sale of FORCE BLUE merchandise
* On-boarded a second team of six Special Operations Forces veterans (TEAM TWO) in August
* Won the 2018 Blue Mind Award that is given each year to the organization that most exemplifies the healing power of water
* Named a finalist in the Nonprofit Leadership category at the 2018 SHIFT (Shaping How We Invest For Tomorrow) Awards
* Part of the Saving Coral Reefs team that won the 2019 XPrize Design Competition at the XPrize Visioneering Summit in Los Angeles
* Launched Florida Project Protect, a 3-year, US$9 million campaign to assist the state in its ongoing efforts to rescue, preserve and restore the vitally important, critically threatened Florida Coral Reef Tract
* Contracted with the Florida Department of Environmental Protection and trained this December to begin coral disease intervention work in January 2019
* Selected to present an abstract One Team. One fight: Communication & Cooperation in a Partisan Climate at the Reef Futures symposium in Key Largo in 2018
* Put into motion initial planning for a 2019 green sea turtle rescue mission in partnership with the Turtle Hospital in Florida

Ritterhoff says, “FORCE BLUE is a transpartisan organization and unique model enabling those who care about the wellbeing of our military veterans and those who care about the health of our oceans, lakes, rivers and bays to unite within one common mission. Through FORCE BLUE, we have the ability to reshape the conversation — not only about how we treat our planet, but about how we treat our returning combat veterans as well.”