Results And Report Of The 2014 END-WET 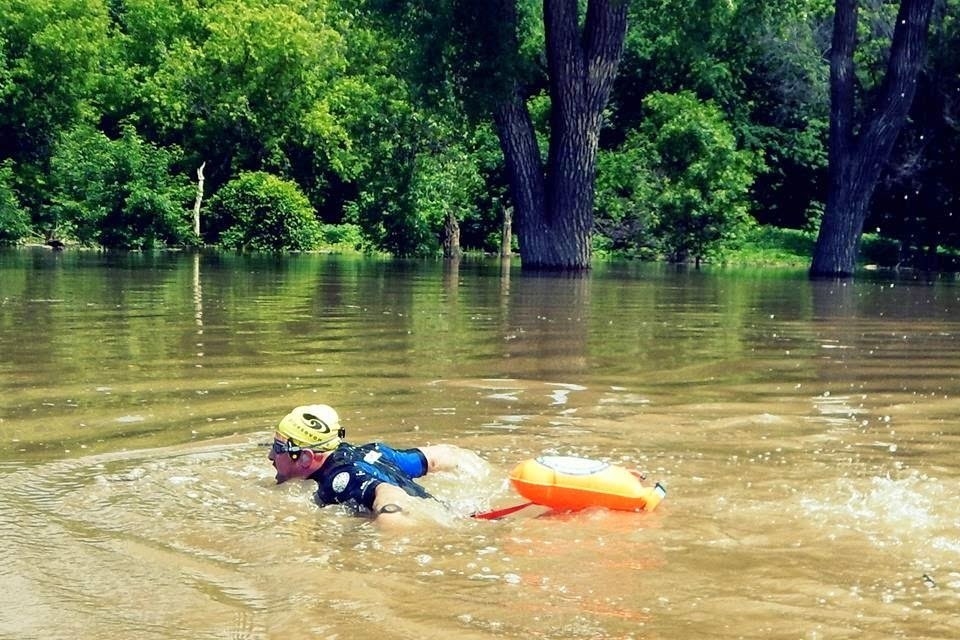 Andy Magness managed the 36-mile (57.9 km) END-WET event in the Red River during ‘The Year of the Flood’ conditions under sunny skies and water temperatures between 68 and 70ºF with light winds from the S/SW. “The river was at flood stage,” reports Magness. “The Grand Forks Gauge was at approximately 33 feet – the flood stage is 28 feet.”

Word out of North Dakota and Minnesota has it that Andy Magness pulled off another magical race down the mighty Red River of the North in his annual Extreme North Dakota Watersports Endurance Test (END-WET), a 36-mile (57.9 km) marathon swim from rural North Dakota to East Grand Forks, Minnesota.

18-year-old Braydon Love completed it. Suzie Dods was among the first women covering the distance in roughly 9 hours. 16-year-old Annaleise Carr was behind her, finishing in about 9 hours 30 minutes. Dan Projansky did the entire thing butterfly.

Veteran marathoner Kathleen Wilson said, “The Red River swim was a great race yesterday. Water warmed to 68-70ºF (20ºC+) with a fast course and plenty of debris. The paddlers had a very busy day guiding swimmers around debris fields and around many individual objects in the water. I still hit plenty, large and small that lurked just below the water surface.”

Darren Miller, the winner of the inaugural END-WET in 2012, recalls a similar enjoyable experience. “It is a very unique race due to its remoteness in North Dakota and Minnesota. I loved hearing stories of the locals who thought it was very dangerous to swim down a river dividing the states. The reality was Andy and his team at ENDracing put on one amazing event and took every safety precaution* necessary to insure our safety and success. 100% [of the swimmers finished.

The water was warm and the air was hot. In the weeks prior to the event there was must have been a drought as the river was low. At times, my hand hit the bottom of the river which was shocking, however it was typically when we tried to cut corners as best we could and crossed over the river. It flowed fairly quickly at times. I loved that my support was a canoe, and really enjoyed the quarter-mile run after the first mile to go around a rock formation in the water – something unique to this race
.”

Miller recalls the important navigational elements of swimming down a winding river. “To win this particular event, it is necessary to have a knowledgeable support crew who know the river well, and are able to take advantage of the natural landscape to navigate more proficiently. The ability to sight and swim in water that is fast moving with low visibility is necessary as well. It is a great environment, but might be quite different than what you’re used to. As with every marathon swim, expect the unexpected.

Picture a bright, sunny day, river water, ‘plains’ landscape, occasional downed trees a few railroad trestles. Everyone was great, and I could not be more happy with how the event turned out. The Mayor even gave me the key to Grand Forks, North Dakota. It was a wonderful memory
.”

* All the swimmers had to wear an International Swimming Hall of Fame SafeSwimmer™ Float.

Photo courtesy of Patty Hermann shows Dan Projansky wore a rash guard by Rip Curl in finishing his all-butterfly effort in 12 hours 2 minutes. But even with the longest butterfly swim of his career, Projansky said, “The highlight of my day was receiving a signed copy of Annaleise Carr’s book. She is a little gem.”