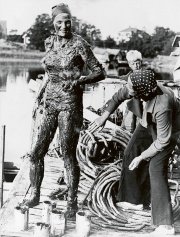 With the spots filling up for the Across Øresund Swim, an 8 km crossing between Denmark and Sweden, event director Manne Sådär Lorentzon looked back at the pioneers of Øresundssvømning.

Sally Bauer was one of those pioneers.

A national-level pool swimmer who set 17 Swedish national freestyle records between 1934 and 1937, she is perhaps better known for her open water exploits. Bauer was the first person to successfully swim across the 8-mile Øresund strait in 1931.

Later in 1939, she became the first Swedish swimmer to cross the English Channel, finishing in 15 hours 22 minutes. She crossed the Channel again in 1951 at the age of 43 when she finished 14th in the 1951 Daily Mail race (see results below).

Way past her prime and with a child, Bauer finished the 1951 Daily Mail race with the grit and determination that she was known for in her competitive days: