As the world continues gets more polluted and the sport of open water swimming continues to grow, these two phenomena will eventually clash.

But a new revolutionary testing process looks to help protect marine enthusiasts in potentially contaminated waters, initially in Orange County, California, and eventually around the US.

Tony Barboza of the Los Angeles Times reported on a revolutionary new water quality test that is being rolled out in Southern California.

The new testing method, developed by researchers at the University of North Carolina to be implemented by the California State Water Board Researchers and Southern California Coastal Water Research Project, a local research institute, has been in the works for ten years and required nearly US$8 million in investment to monitor water quality.

The two-hour process – from water collection to wireless distribution of information to the public – is being demonstrated by the that hopes the methodology is adopted nationwide by 2012. 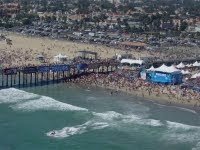 According to the Los Angeles Times, the roll-out period will include five tests per week during July and August at the popular Huntington Beach, Newport Beach and Dana Point. With 110 million annual beach-goers to the Southern California coastline, the ability for cities to quickly test the water has significant impact and implications, especially open water swimmers who are the most exposed individuals in beaches worldwide.

By collecting, analyzing and monitoring the water quality in near real-time, beach closures will be quicker – as will beach reopenings. Both decisions will be greatly appreciated by open water swimmers off the Southern California coastline.

“The holy grail would be a probe you could stick into the water that gives you an instant result,” said Rick Wilson, coastal management coordinator for the Surfrider Foundation. “But this is the best we’ve got for now.”

Which is much-appreciated improvement. Let’s hope the tests pass with flying colors and will be expanded nationwide and worldwide.