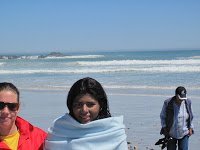 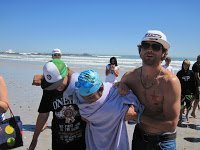 You really have to respect marathon swimmers who can only train in warm places who complete their solo swims in cold conditions. Two Indian sisters, who previously completed a swim across the Strait of Gibraltar, did just that.

The marathon swimming sisters just completed what is believed to be the coldest solo crossings from Robben Island to Blouberg, Cape Town, South Africa.

20-year-old Richa Sharma (shown on left) and her 23-year-old sister Rashmi (right) from Kolkata in eastern India, successfully made the 7.5K crossing in 2 hours 57 minutes and 2 hours 45 minutes respectively.

The water temperature dropped from 11°C (51.8°F) to a low of 9.2°C during their swim. Peter Bales, chairman of the Cape Long Distance Swimming Association, accompanied Richa and Rashmi in their support boat, “These were probably the coldest conditions Robben Island has ever been swum. It was a pretty good effort by the two, but Richa had to go to hospital for hypothermia. She was discharged after a few hours after they managed to get her temperature back to normal.”

The Atlantic Ocean off Cape Town is notoriously cold, averaging around 13 – 14°C. But Peter explained that sustained south easterly winds whipped up the colder water from below the surface.