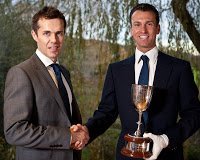 World Aquathlon Champion Richard Stannard was awarded the Inman Challenge Cup, the top prize at this year’s Henley Swim awards ceremony, at the Henley’s River and Rowing museum this week.

Working closely with the museum, the founders of the mid-summer dawn event hold their prize-giving and networking event in the winter in order to give the aquatic community a chance to mingle off season, and to announce their schedule of races for the following year.

Event co-founder Jeremy Laming (on left) explained, “With the help of the museum, we resurrected two ancient swimming trophies. Both trophies date back to the late 19th century, and are awarded to the first male and female open category winners. As the event becomes ever more popular and therefore competitive, we felt the prizes needed to match the prestige involved and the ‘adopted’ trophies are perfect“.

Henley Swim will use a lottery system for its 2012 event, which will stay open until the December 26th for registration. The Henley Classic is held on June 24th, the Henley Mile is held on July 8th, the Bridge to Bridge is held on August 19th, and the Queenford Relays culminate the season on September 23rd.