Rivals Joyfully Competing Every Stroke Of The Way 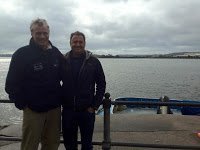 Great rivalries in sports showcase intense competition between focused, committed athletes often competing for something larger than themselves: their teammates, their city or their country. This pressure and allure of competition is felt and enjoyed by themselves, by their colleagues, coaches and fans.

Ram Barkai and Ned Denison live on opposite sides of the planet – one in South Africa; the other in Ireland. But they are united in an international brotherhood rooted in the ocean by their organizational talents, extreme swimming exploits, inspiration and support of others around the globe, and an emerging global race for the ultimate bucket list of swims.

And now their aquatic rivalry may extend to terra firma.

While Barkai focuses on relatively short swims due to their extreme nature in single-digit water with his organization, the International Ice Swimming Association, Denison focuses on the longer channel swims like the English Channel through his Cork Distance Week.

Last May, Barkai welcomed his Irish counterpart to Cape Town where the International Marathon Swimming Hall of Fame inductee completed the cold-water, rough-water Robben Island swim. This inspired Denison to declare the Triple Crown of Prison Swims (“Triple Break“). This new series attracted Barkai and others including the renowned Gary Emich (of 800+ Alcatraz swim fame) to Cork, Ireland last summer to complete the Spike Island swim and continue completing their bucket list.

Back and forth, the rivals punched and counter-punched. Discussed and debated, plotted and planned…in a cordial way. While Barkai trains in the rough oceans during his South African winter without a swim cap, Dennison similarly swims in single-digit water expanding his range in temperature as well as distance.

Dennison then took off to Western Australia to swim the Rottnest Channel Swim and become the first person to complete the Quatro Break – leaving Barkai just a step behind.

But Barkai came right back by adding another location to his global ice swimming network. Like a bold general, he went right into the gut of Dennison’s backyard: he took the first opportunity to do an ice swim mile in Cork. Swooping in stealthily at night, Barkai got up early the next day for an early morning Spike Island swim. The water was colder than expected – much to Barkai’s gleeful pleasure – and the departure of the two watermen from opposite ends of the earth was delayed by tanker traffic.

Barkai described the end of the swim, “I thought that the 1.3-mile swim would be easy until the last third. The current started to take me towards the sea and in just under and hour I grabbed the last possible set of steps on to Cobh. Ned was enjoying my struggle and then dragged me down for a lap of Sandycove Island.” As quickly as he arrived, Barkai was off again, departing Cork 18 hour after his nighttime arrival, for another jaunt on his global tour. 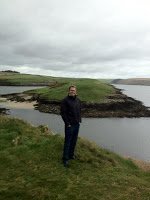 Barkai had accomplished his goal: he joined Dennison in the Quatro break club.

But the Alpha Male from Cape Town was eyeballing something other than Denison’s club. With a high navigational IQ and well-developed business acumen, he swam around Sandycove Island suspiciously days before it was publicly announced that the island was for sale.

Will these two great rivals now meet in the auctioner’s room for another competition?

Photo shows Ram Barkai overlooking Sandycove Island that is up for sale.