Road Rage In The Open Water 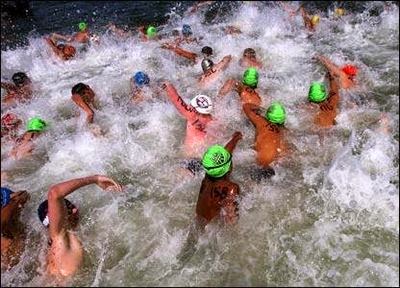 What if triathletes and open water swimmers were built like cars?

With horns, lights and blinkers?

Imagine if triathletes and open water swimmers had built-in horns and high beams to use when another athlete cut in front of them or when someone crossed their path or grabbed their legs around the turn buoys?

There would be so much noise and commotion, louder than an onramp to crowded Los Angeles freeway on a Friday night:

In crowded situations, aquatic athletes would slam on their horns like drivers filled with road rage. Retaliation via rude gestures, verbal insults, and horn honking would ensue.

Or not. Most aquatic athletes accept the fact of physicality and simply swim on.