Rob Cooney is a 38-year-old swimmer from McKean, Pennsylvania. On July 19th, he swam across Lake Erie as a charity swim for his father Dave Cooney who was diagnosed with Parkinson’s Disease.

The son was swimming to raise money for Parkinson’s Partners of Northwest Pennsylvania.

Before he left shore at 6:40 am, Lake Erie was turbulent with 2-3 foot waves. “It was enough for the experienced boat captain to question if we should proceed.”

But calm ultimately prevailed and his escort flotilla of 5 ocean kayaks and 2 motor boats finally took off. “The American coastline was visible at all times, but we lost sight of Canada after 5 miles. His total break time was 91 minutes with breaks varying from 2 to 8 minutes.” 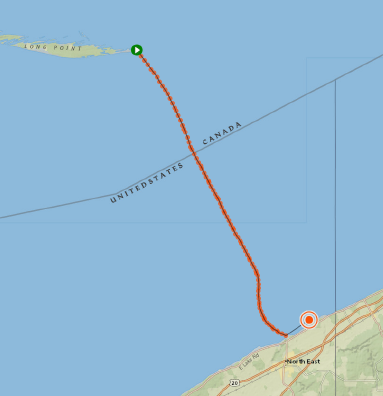 Observer Darren Miller reported, “He was escorted by Captain James Armstrong on the Fishing Magician out of North East, Pennsylvania with escort kayakers McDarragh Minnock, Ronald Schmoll, and Scott McBride.