Rob Dumouchel, All Rosy And Pink 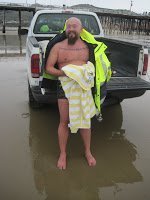 Why is the well-known open water swimming documentarist Rob Dumouchel a slight shade of pink?

Why hundreds of thousands around the world were going for a little dip in the ocean on New Year’s Day – basically running in quickly, splashing about and then enjoying the experience and the many after stories with friends and family after seconds or minutes in the water – Rob was doing a legitimate 4-hour, against-the-current, lumpy-and-bumpy 10K marathon swim in 53°F (12°C) water off the central coast of California.

By the looks of the photos of Rob, it was a one-man affair with the ocean.

But Rob was not the only man with Mother Nature on this swim: he not only had an experienced team of observers and fellow open water swimmers with him, he also had LiveSwim.net film, broadcast and archive the entire swim – a technological marvel available to any other swimmer or open water event

For detailed information on Rob’s 4 hour and 9 minute 12°C charity swim, he explains the details here. Chris Lundie’s camera work from the escort boat is here.