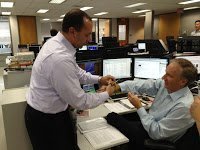 Rob Kent is a marathon swimmer and endurance athlete who is the driving force behind L.O.S.T. (Lake Ontario Swim Team). His passion and enthusiasm for open water swimming for triathletes and marathon swimming for committed solo swimmers know few bounds.

Day in and day out, spring, summer, fall and winter, Kent is on the ball in the open water swimming community in Canada. His support for other swimmers and his promotion of the sport is the fuel that drives and provides opportunities for many.

His passion is genuine and he loves watching and supporting athletes who attempt endurance sports naturally and fairly. So it was not without sincere thought that Kent cut off his Livestrong bracelet that he had worn since 2004. He explains in a November 2012 post here and talks other issues surrounding Livestrong.

Q1. By cutting off the bracelet are you demonstrating that you no longer support Lance or no longer support Livestrong or both?
Rob Kent: I would assume that Livestrong was done very professionally, I’m sure Lance had very little to do with the actual day to day running of the foundation. It was/is a huge organization. I’m sure all of the people at Livestrong were as surprised as I and everyone else was too. and I feel genuinely bad for them, as they had more invested, personally and emotionally and even financially by way of employment. But they were all duped too. Part of the genius to not getting caught for this long was how Lance was able to contain the lies and cheating. I would be very surprised if anyone at Livestrong knew anything about it.

There are lots of other ways to support cancer without having to explain yourself for giving via Livestrong. There is obviously a link between the two that I (and I assume lots of other people) aren’t comfortable with. If people want to continue giving to Livestrong, that’s fine. But it’s not for me. As opposed to supporting Lance, which isn’t fine in my mind, the only way one can support him now is if they haven’t done enough research and are just doing the ol’ ostrich trick with their head in the sand. My hunch is that Livestrong will likely wither and die which is actually a shame because I’m sure Livestrong has done a lot of good as has Lance. Just that cheating, lying and fraud as a foundation for all the good negates the good at least in my mind.

Q2. What is the ultimate result of this controversy?
Rob Kent: Human nature is such that people want everything to be black or white, but the reality is that usually it doesn’t work that way. I was a firm supporter of Livestrong and Lance. They both did a lot of good for a lot of years. I am sure there are a lot of cancer survivors and families that would agree even more strongly – which is what makes the whole messy situation even worse. I can’t support Lance and don’t feel comfortable supporting something that is so closely related to him…even if he has been kicked out of Livestrong now.

He also did a lot for cycling and the Tour. However, the backlash from all of this may mean that both would have been better off without him in the long run. I can’t imagine a long line up of parents wanting to push their kids into cycling now or for a long time into the future
.

Q3. Will this help reduce cheating in sports?
Rob Kent: People will still cheat when there is a lot on the line and are not monitored properly. Unfortunately, for the general public, the biggest thing they will learn is to be more skeptical and cynical; something we really don’t need more of. That doesn’t help the next great athlete, like Phelps, or Sun or the female Chinese swimmer that “was faster than Lochte” in the last 50 of the 400 IM [at the 2012 London Olympics].

Because of Lance and Bonds, Sosa, McGwire, Clemens, Marion Jones, etc., but only to a limited degree. The urge will never go away. The only thing that can limit, but not eliminate, it is closer policing unfortunately. But that is where the real improvement has come in Major League Baseball, Olympics, cycling, USADA, etc
.

Lance Armstrong will appear on the Oprah Show on January 17th at 9 am to explain his situation.