Rob Lea, James Tout, Georgios-Ioannis Tsianos Do The Uniquely Unusual Around The World 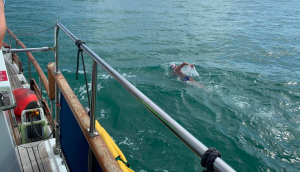 Rob Lea, James Tout, Georgios-Ioannis Tsianos Do The Uniquely Unusual Around The World

Courtesy of National Geographic Magazine, Park City, Utah. Rob Lea of Park City, Utah is the only person in history to complete a Calendar Year Peak and Pond that requires a successful crossing of the English Channel and a summit of Mount Everest, both within one calendar year. Lea completed the unprecedented feat 45 days apart when he completed a summit of Mount Everest summit on May 24th and a English Channel crossing from England to France on July 10th in 11 hours 47 minutes.  His Outside Magazine interview can be seen here. But his endurance goals did not end on the shores of France.  He wanted something more. Lea explained his definition of the Ultimate World Triathlon to National Geographic Magazine, “No one had ever summited Mount Everest and swum across the English Channel in a calendar year.  I thought, ‘Oh, this would be a hell of a challenge, to try and do it in the same year.’  But then [my mind turned] back to my triathlon days. I thought, ‘If Everest is my run, because I can’t run, and I’m going to do the swim, what could I do as far as a bike?’
That was a pretty easy decision, because I’ve always wanted to bike across the [United States]. So there, all of a sudden, this idea was born, to do what I made up as my ‘ultimate world triathlon.‘” His last leg – a bike across America – is scheduled to begin in September 2019 and may take up to 6 months. Lea’s multi-sport achievement calls to mind other unique endurance athletes. 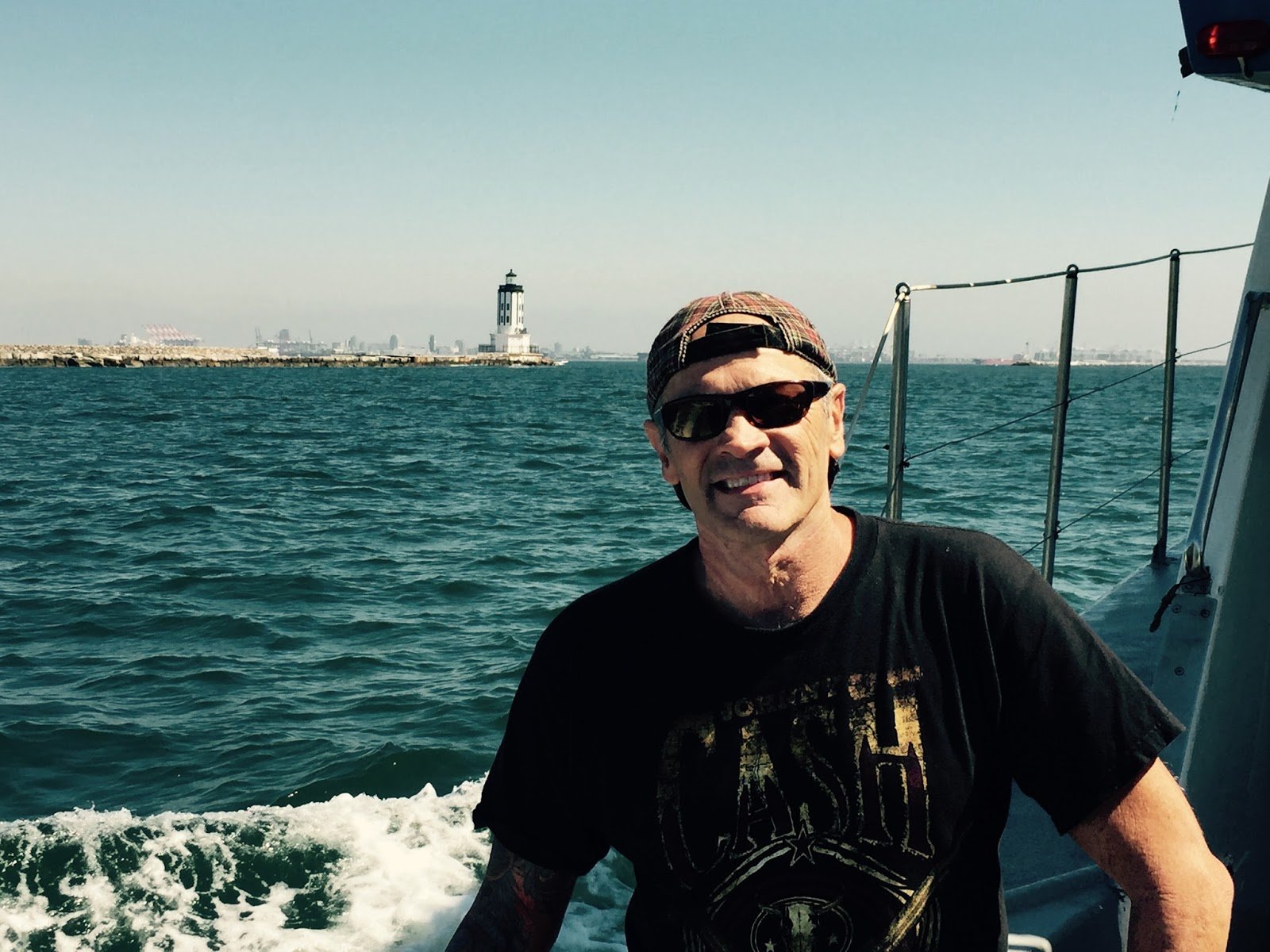 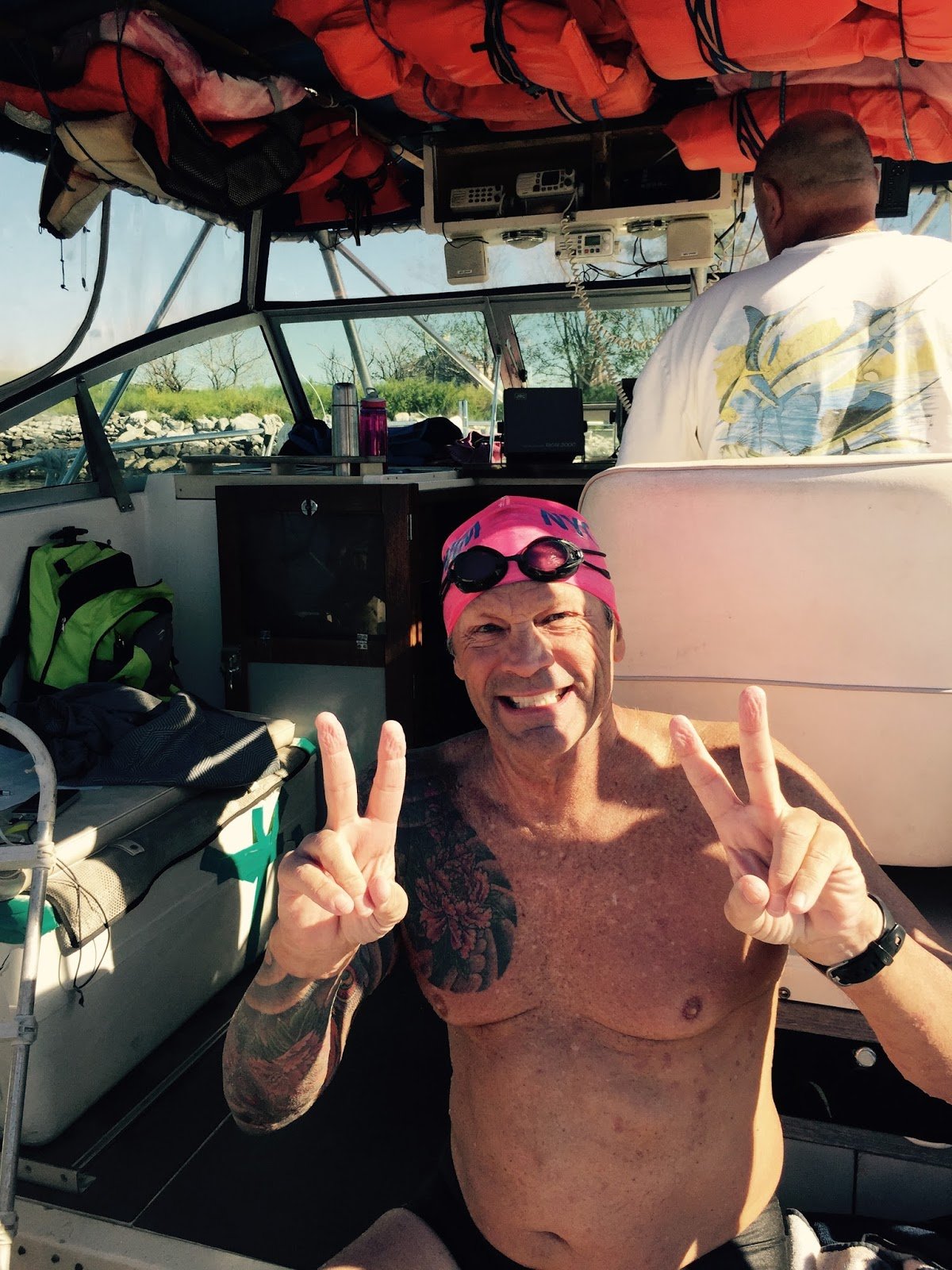 Four years ago, 62-year-old James Tout of Austin, Texas was a far cry from achieving the Triple Crown of Open Water Swimming.  The Hawaiian Ironman, marathon runner, and English Channel swimmer was a far removed from this athletic days. But times change. “One of my doctors told me that there was nothing but a thin red line that separated me from death.  My diagnosis of congestive heart failure on July 21st 2011 took everything away from me. I had been symptomatic for years, but the diagnosis was something different. It devastated me. I couldn’t lift anymore and running or riding was out of the question.” The 10-time Manhattan Island Marathon swimmer and nominee for the 2015 World Open Water Swimming Man of the Year could not even do a flip turn because he couldn’t hold my breath long enough to streamline off the wall. His endurance athletic past – or even a 50-yard freestyle – seemed to be over. Until one day he saw the news on television and his life turned around unexpectedly. “I saw a news program that covered President George Bush who jumped out of a plane to celebrate his 90th birthday. He also jumped when he was 75, 80, and 85 years old. A smile crossed my face; I thought, ‘That is simply amazing.’ And to be have a disability and still do it put President Bush’s accomplishment on a different level.” Tout spoke about the impact of President Bush’s activities with his wife. They talked about his own history at the Manhattan Island Marathon Swim. “I did MIMS for the first time in 1985. I was also there in 1995 and in 2005. The 2015 race would be my 30-year anniversary.”  But he was realistic with his physical – and mental – limitations. “Even though my doctors told me my congestive heart failure was controlled with medication, mentally I was lost.” He started to swim and then got motivate to swim for others with congestive heart failure. “A diagnosis of heart failure can be a death sentence to some, but to others it can be an opportunity.” Tout became tremendously motivated by the opportunity and started to step up his training big-time. Then he planned on a “difficult double” as he wife described the nearly back-to-back Manhattan Island Marathon Swim and Catalina Channel. Tout trained to do something that would make men half his age think twice: he attempted his 10th swim around Manhattan Island only three days after an attempt of the Catalina Channel. Not only did he have to swim 28.5 miles after a 20.2-mile channel crossing, he had to travel cross-country to achieve his goal – not an easy task for anyone and certainly not for a 62-year-old with heart disease. But two major swims within four days was what resulted and why he was recognized as being someone who best embodies the spirit of open water swimming, possesses the sense of adventure, tenacity and perseverance that open water swimmers are known for, and has most positively influenced the world of open water swimming in 2015. “I wish I hadn’t held back at Catalina, but a successful crossing is good even if my 11 hour 18 minute time is kinda slow. I had thought that I could get under 10 hours or at least breath my 10:33 English Channel time, but I couldn’t stop thinking of the effect a hard Catalina Channel crossing would have on [my] New York [swim]. I kept hearing Morty Berger’s words ringing in my ears, ‘Once it looks like you’re going to make it, take it easy or you will pay for it later doing Manhattan.'” He did and he not only achieved the Triple Crown of Open Water Swimming and devised the Triple Crown of Endurance Sports where he completed the Hawaiian Ironman, ran the Boston Marathon, and swum cross the English Channel.  This unique achievement has only been accomplished once in history – by Tout. Tout recalls the history of the Triple Crown.  Tom Hetzel and Ashby Harper were doing English Channel crossings in the early to mid-1980’s. “Tom recalled that Ashby was one of the first people who referred to the three swims [of the Triple Crown of Open Water Swimming] as the Rare Triple,” recalled Tout. Georgios-Ioannis Tsianos of Greece also accomplished something similar and but arguably more daunting than the Rare Triple: the Ice, Water, Fire Challenge.  The Ice, Water, Fire Challenge requires soloists to climb Mount Everest, swim across the English Channel, and run the 250 km Marathon des Sables through the Sahara Desert.  To date, Tsianos is the only person in history to have completed this triple achievement. Copyright © 2008 – 2019 by World Open Water Swimming Association