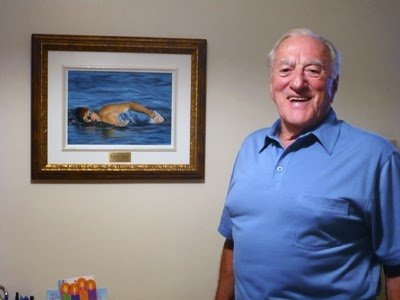 Robert Cossette and Christine Cossette of Canada are the only father-daughter duo who has been inducted in the International Marathon Swimming Hall of Fame.

In 1984, the 22-year-old Christine delighted her fellow Québécois when she became the first person to complete a 64 km (39.7-mile) two-way crossing of lac St-Jean in Canada. After completing the first leg in 9 hours 29 minutes, she picked up speed and negative-split as she returned on a second leg of 8 hours 59 minutes. Her 18 hours 27 minute swim was celebrated like few other swims in lac St-Jean and no one was prouder than her father.

He also completed a crossing of the English Channel in 12 hours 5 minutes in 1964 and raced in numerous races:

He was the first person to swim 37 km (23 miles) from Chicoutimi to Bagotville along the Saguenay River in Quebec, Canada that resulted in the annual la Descente ou remontée du Saguenay event.

He also served as the president of the Marathon du Saguenay from 1973 to 1988 and trained several swimmers for both the Traversée internationale du lac St-Jean and the 37 km (23-mile) la Descente du Saguenay.

He will be long remembered fondly and with great respect among his fellow Québécois and marathon swimming community.