Roger Finch Having A Great Time In The English Channel 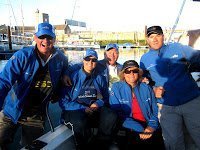 Roger Finch, originally from Zimbabwe, currently from South Africa, became a member of the Half Century Club with his 12 hour 39 minute crossing of the English Channel on August 20th.

Formerly an age-group swimmer, he traveled the world doing motorcycle road racing and then equestrian show jumping. Working with horses went well until five years ago when he smashed my pelvis in an accident.

After many months in bed, he was sent to the swimming pool for rehabilitation. After months of swimming one kilometer, his sister persuaded him to enter the aQuellé Midmar Mile. Finishing 76th, Roger thought, “If I do some training, I can do better. So I started training at The Wahoo Complex and soon moved up to third place in my age group. I then turned to the Cadiz Freedom Swim from Robben Island. I did a few training swims in the Atlantic and found that cold water did not pose much of a problem.

Roger had caught the bug.

“The Cape Town guys were happy with me and invited me to join them at the 2010 Rottnest Channel Swim. It was my first long swim. I had never fed on a swim before so I just drank as much as I could each half hour which resulted in me throwing up after 6 km to the end of the swim. But I was very happy and knew that it had opened a new door for me to much longer swims. My plan was to the head to the Strait of Gibraltar in 2011, but after managing to secure a number 2 swim slot on the 20 – 27th August tide, I concentrated on the English Channel.”

He adjusted his training with his coach Mike Nel to increase his average training volume from 20K per week.

“I trained on my own in a lane six days a week. I did my six-hour qualification swim in Dover. [In Dover], I got to train with swimmers who were waiting to do their crossings. From October, I training in Cape Town on long cold ocean swims and practice feeding. I brought Maxim back from Dover and it worked well for me.”

He ended up doing 11 Robben Island to Three Anchor bay swims and a Blouberg-to-Robben Island double crossing. “Cape Town has to be one of the best places to train for the channel as it boasts a 100% success rate and all the guys are very helpful.”

Ultimately, he left for Dover with his training partners, his coach, a friend and his wife. The team met with our pilot Chris Osmond on the boat Sea Farer 2 to discuss the swim that would start at 3 am. “We started the swim at 3:10 from Samphire Hoe. It was pitch black. All I saw was the port and starboard lights on Sea Farer 2. I was being tossed all over and was not putting 2 strokes together. Then my first feed came with a mix of maxim and Milo. It went down well and I was happy and settled. But the ocean was not so kind and threw me around for the next two hours. But there was not one second in the entire swim that someone was not watching over me which was very reassuring.

I swam into a great sunrise and watched the jets leaving vapor trails all over the sky. Below me, large brown jelly fish floated past and was stung on my leg. Ann hour later, I received a full blown blast on my chest. After the sun came up I would watch my team on board and marvel just how lucky I was to actually be in the Channel swimming and have such a great team to support me. At moments I would feel my goggles with tears of joy seeing the team and all the messages of support on the board.

Otto Thaning, who had swum the channel in 1994, was watching my live tracking and told my crew now is the time to push hard. They relayed the message. I went for it cutting straight through into France at Le Petit Blanc Nez and landed on the beach full of sun tanners who gave me the biggest reception. All in all I loved every stroke of the swim, I never felt cold and had a great time