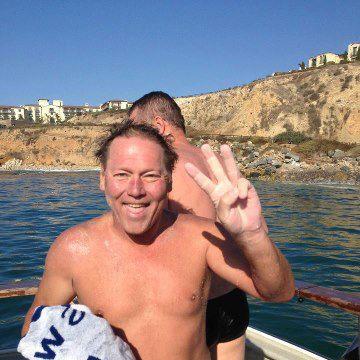 Swimmers have traveled from as far away as South Africa and Australia to take part in this year’s Boston Light Swim, an annual 8-mile open water swim across Boston Harbor held on August 20th. Dubbed the Granddaddy of American Open Water Swims, the Boston Light Swim is one of the oldest open water races in the United States and was first contested in 1907.

59-year-old Roger Finch of Johannesburg is traveling from the Southern Hemisphere to participate in the event. Finch was the first South African Triple Crowner and will be joined by fellow Triple Crowners Suzie Dods of San Francisco and teenager Lochie Hinds of Sydney, Australia.

While the Boston Light Swim attracts the crème de la crème, the event also attracts others like local human rights lawyer Brian Concannon. The 53-year-old is the Executive Director of the Institute for Justice & Democracy in Haiti and has a message to share. “One of the reasons I am excited about the Boston Light Swim is that we can now do it. Thanks to the harbor cleanup, we can swim across the harbor or dunk at a beach without undue risk of toxins or disease.”

He explains his job, “It involves working with victims of the cholera epidemic brought to Haiti by reckless disposal of sewage at a United Nations military base there in 2010. Cholera has contaminated the waters where Haitians bathe, wash clothes, and drink, killing thousands.” He points to the substantial efforts taken in Boston to clean what was once the dirtiest urban waterway in the country as reason to believe the same can be done in Haiti.

“The Boston Light Swim is a source of tangible hope and inspiration that Haiti’s waters can one day be made safe for the people who use them.”

Veteran race director Elaine Howley describes the event. “Competitors will start in the water on Saturday morning off of Little Brewster Island. From the shadow of America’s first lighthouse, which is celebrating its 300th anniversary this year, the swimmers will launch their 8-mile trek through the Boston Harbor Islands National Park, aiming for a beach finish at the famed L-Street Bathhouse (Curley Community Center) in South Boston. Spectators are encouraged to arrive at the beach to cheer in the finishers beginning at 10 am. Most swimmers complete the course in 3-5 hours, and there is a strict 5-hour time limit on the course.

The Boston Light Swim is considered one of the most difficult open water swimming races in the world because of the chilly 14°C (58°F) water temperature typically found at the start, variable conditions, and strong tidal flows. Completion is not guaranteed and safety is the top priority. Warm weather in Boston this year promises to ameliorate some of the cold, but wind predictions of up to 15 mph out of the east could make for a bumpy ride back into South Boston.”

The field consists of 8 women and 17 men, all of whom have significant open water experience. “Local swimming phenom 29-year-old Eric Nilsson of Boston is expected to cruise to his third victory in the event.

New this year, swimmers will be able to share tracking information with friends and family on shore via the new TRACK.RS service developed by Evan Morrison and offered via a partnership with the Marathon Swimmers Federation here.”