Roger That! When The Ocean Turns Very Very Scary 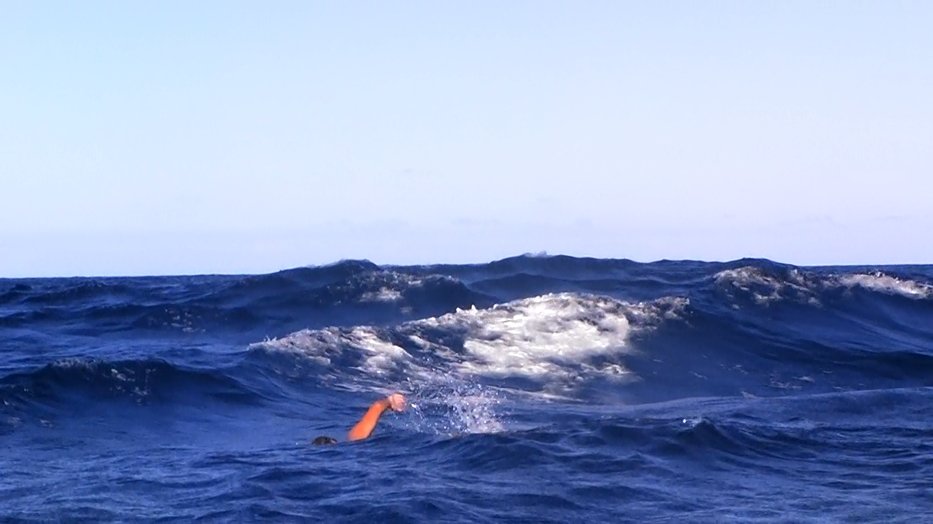 Every year there are close calls, emergencies, contingencies, accidents, heart-stopping escapes, near misses, unintended consequences, and deaths that occur in the open water community. These are illustrative opportunities for the open water swimming community to learn about and try to prevent at their own level and locale.

Roger Finch tells of a scary happening that occurred to him.

He was doing some cold-water training in Port Elizabeth for his Catalina Channel crossing together with his kayaker Ian. Ian had helped him on the annual Nelson Mandela Bell Buoy Challenge. Finch had planned to do a training swim from Hobie Beach to the Bell Buoy, a large buoy anchored at Roman reef over 4 km out to warn ships.

Finch recalls, “The ocean was picture perfect that day. The water was a nice 16°C, deep blue in colour with the sun shinning. I felt great on the swim out.”

But soon conditions would change. And change for the worse. The swell and waves picked up and pushed Finch in the opposite direction from shore. Instead, he flew out to Bell Buoy within 56 minutes. “[At the buoy], I asked Ian if he would take a few photos. But with the ocean being so rough, he needed everything he had just to stay upright in the kayak. You are going to have to work hard to get back, I laughed and [welcomed] the good training.”

That good cheer and positive mindset among the elements was short-lived given Finch’s long push back against the massive outgoing swells. “As we left Bell Buoy, I saw Ian paddling to the left of me. After 10 minutes, he wasn’t there anymore. I stopped and started looking for him, but I couldn’t see him anywhere…but nothing. I looked everywhere. All I saw were big swells and ocean. I was very aware that I was being blown back out to sea so decided to get swimming and maybe he would find me.”

The initial sense of beauty during a picture-perfect training swim quickly evaporated. The vacuum was immediately filled with a profound feeling of loneliness and deep-seated fear.

“I looked around in amazement that we could not see each other. I could see enough to know that shouting was not an option. It was very scary to see nothing but ocean and no where was Ian.” Similar to other swimmers in this situation, Finch had very troubled thoughts about his kayaker Ian all the way back while at the same time swimming, literally, for his life.

“15 minutes later, I stopped again to look for Ian. Still nothing but ocean. I started to feel very lonely and nervous. Ian is a very experienced paddler so [I figured that] something has happened out here to him. I started to look into the depths and wondered what was around me. I thought that a Great White Shark might have taken him. This is not a nice thought when I was 3 km out to sea – by myself – and lost.”

But Finch was constantly thinking of his friend. “My car keys and everything are locked in his boot, so when I do get in I can’t phone the National sea rescue.” Yet self-preservation started to become his top priority. “I was being taken back out to sea by the swells and was a very worried swimmer. I heard a loud drone underwater; it was a Chinese fishing trawler heading straight for me. But it had seen me over 3 km out sea on my own and assumed that I had been blown out to sea from the beach. The trawler stopped next to me. But I couldn’t understand what they were shouting. I shouted back, ‘Have you seen a kayaker out here?’”

But communications were too difficult and there was no mutual understanding. The trawler then they threw a rope ladder down so that Finch could climb on board. Finch was battling with his better judgment and convinced himself to stay in the water and continue his training for his Catalina swim. “I was close(r) to the finish, so I turned and started swimming in the direction of Hobie Beach. [Soon] the trawler left me.”

Alone again. This time, it was a definitive, deliberate decision by Finch to battle the elements himself.

“Now I was back to wondering what was lurking around me out there and what has happened to Ian.”

After an hour and 20 minutes, Finch made it back to Hobie Beach and expected to see Ian.

But there was no one. There was nothing. Two men went out, and only one returned.

“I stood and looked out to sea for him…but nothing, I was cold with no towel or phone, so decided I would run across the road and into the casino complex in my Speedos to phone for help,” recalled the first South African to complete the Triple Crown of Open Water Swimming. “But just before I did, I got a glimpse of a paddler and waited. It was Ian. You have never seen two more happy people!”

Both men were just about to phone the sea rescue. “I had lost Roger in the swells and spent all the time out at Bell Buoy looking for him,” remembers Ian who left things unsaid. “I didn’t think that he would have made much progress against the big swell…”

The next day back in Johannesburg, Finch decided to go to Ocearch’s shark tracking website to see where the Great Whites were. “There was some activity in the Port Elizabeth area so I zoomed in. It turns out that I had no reason to feel lonely out there. From the tracking, there was a Great White male nick named Albert whose swim track mirrored mine.”

Albert is a 550 lb. Great White Shark that was tagged earlier at Gans Bay, close to Cape Town. Albert’s track shows that he had been following the Chinese trawler into Nelson Mandela Bay right about where Finch was swimming. “Around the point that the trawler intersected me, Albert changed his course [from the trawler to] swimming with me all the way to Hobie Beach. He stayed there for the rest of the day and then went back out to see that night.”

Looking back on that experience, Finch was overjoyed for his luck and learned a little bit more about the inherent risks of the ocean and why pre-planning and a ubiquitous, overriding concern for safety is essential. “Never take the ocean at face value. It changes all the time. This swim could have been my last swim in more ways that one. Thankfully I was spared. We always need to have a back-up plan with your support team.”