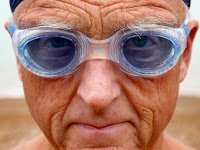 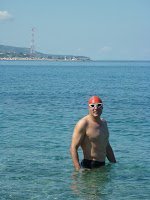 Over 300 people braved uninviting weather on H2Open Day where Olympic bronze medalist Cassandra Patten presented the winners of the 2012 H2Open Awards at the inaugural ceremony organized by H2Open Magazine.

The awards, designed to celebrate achievement in open water swimming, received over 200 nominations across the eight categories. A distinguished panel of judges then reviewed all the nominations and short-listed the top four in each category.

Inspirational Swim of the Year – Roger Allsopp (shown above), who became the oldest person to swim the English Channel in September 2011.

Open Water Ambassador of the Year – Colin Hill (shown on left), for his work to bring Olympic marathon swimming to London and for raising the profile of open water swimming through television and other media.

Charity Swim of the Year – David Walliams for his epic 8-day 140 miles swim along the Thames through which he raised over £2 million for Sport Relief.

International Swim of the Year – Lorne Pier to Pub, a massively popular 1.2km sea swim in Australia now in its 32nd year.

Best UK Event – Nova International for the British Gas Great Swim Series, credited with driving the massive rise in popularity of open water swimming in the UK, the series attracted over 20,000 swimmers across its 5 events in 2011.

Coach of the Year – Bernd Berkhahn, German coach whose swimmers picked up all the top spots at the 2011 European Open Water Swimming Junior Championships.

Innovation of the Year – AquaPulse from FINIS, a waterproof heart rate monitor that detects the pulse in a swimmer’s ear and relays that information verbally, while swimming.

Open Water Swimmer of the Year – Oliver (Ollie) Wilkinson who broke the world record for the fastest time swimming around Manhattan Island in 2011, completing the swim in 5:44:02.