Rok Kerin Dominates Around The Bell Buoy In South Africa

Kerin, who has swum all over the world in nearly every kind of condition and venue, utilized his navigational IQ in the 8 km race to win the R10,000 first prize with ease in 1:38:34.

“The conditions were great for a race such as this. I like [the 3-foot] waves – that’s the whole point of open water swimming.”

25-year-old Durban lifesaver Luke Nisbet completed the swim from Hobie Beach in 1:47:26 to finish second with local Michael Marais in third in 1:57:48. 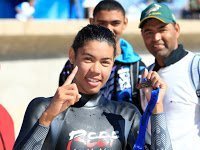 Unlike Kerin‘s comfortable victory, 18-year-old Dominique Dryding from Cape Town was involved in a battle to the bitter end with 16-year-old Nicole Brits from Durban in the women’s race. After swimming shoulder to shoulder, Dominique burst through and out of the surf zone to snatch victory by a mere 9 seconds in 1:55:24. Local Sanmari Woithe used her hometown knowledge to take third in 2:06:09.

“It’s my first time at the Bell Buoy – I didn’t expect it to be as tough,” said Dominique. “Nicole was on my heels throughout the race.”

“This is by far the toughest open-water race in the country,” said International Marathon Swimming Hall of Fame representative Neville Smith.

Photos of Rok and Dominique by Richard Huggard, Snapz