Rondi Davies On The Record About Manhattan Island 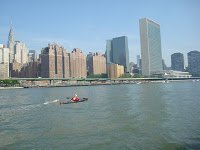 One of the athletes in the Manhattan Island Marathon Swim World Record Attempt, presented by RCN, is Rondi Davies, a dual citizen of both Australia and the United States.

In the shadows of New York City and in competition with two Olympians and the fastest man ever to cross the English Channel, nothing phases Rondi.

“I grew up in the tropics, in Papua New Guinea where all activities were centered around water. Swimming has always been a way of life. I moved to Australia when I was 11 and competed at the national level where I made the finals of [the national championships]. During my 20’s, I competed in open water swims along Sydney’s beaches. I was competitive, often winning my age group and sometimes winning out right..” 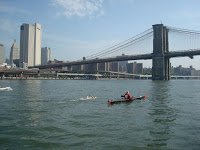 The Manhattan Island Marathon Swim World Record Attempt is right in her wheelhouse. “I moved to New York in 2002 and started doing the NYC Swim events in 2005.”

She also twice won the 10-mile Kingdom Swim in Lake Memphremagog (Vermont) and the 25K St. Vincent’s Swim Across The Sound earlier this year.

She also found time to complete six marathon runs (with a 2:57 best time) and the Empire State Building Run Up while training 40-75K per week, including open water swims in Brighton Beach (near Coney Island) and in the Hudson River Valley.

But as a resident of New York City, the Manhattan Island Marathon Swim World Record Attempt will hold a special place in her heart. “In the immediate vicinity of an urban metropolis, the waters around Manhattan are an extreme contrast of natural elements. They are vast and have subtle, dynamic and complex currents that are controlled by a confluence of different water bodies working to their own tidal rhythms. Swimming in Manhattan’s rivers and waterways is a unique perspective from which to experience the City.”

And she looks forward to swimming fast around the City – perhaps faster than anyone else since Manhattan Island was first swum around in 1915. “The race is timed to utilize a rare alignment of fast currents, so it promises to be an exciting ride. Boat traffic such as barges and commuter ferries and darkness (the final hours of the swim will be at night) add to the challenge.”

And, Rondi has a unique connection to the race for the record, “I am proud to be included in a field of iconic professionals and elite amateurs to chase a record set many years ago by a famous Australian swimmer Shelley Taylor-Smith. Shelley was a household name when I was growing up in Australia.” 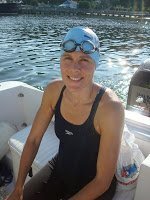 Whether she breaks the record or simply enjoys the ride around Manhattan, Rondi has a well-rounded and practical perspective of an endurance athlete.

“I am constantly motivated by the feats of marathon swimmers in the community that challenge themselves physically and mentally against the elements – cold water, rough seas, strong currents, wildlife. This is one of the most challenging sports I have encountered. It keeps a person humble and always has lessons to teach.”