Ross On A Roll 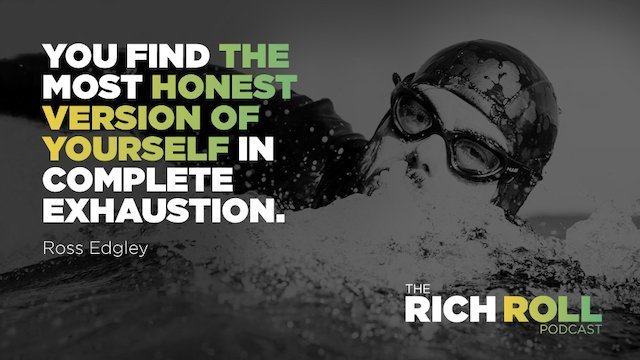 After he cracked up and entertained with his humor and humility the Open Water Summit at the Olympic Club in San Francisco, California, Ross Edgley headed off to an interview with famed podcaster Rich Roll.

Roll was impressed with Edgley’s unprecedented 157-day, 209-stage 2,884 km assisted stage swim around Great Britain. The Great British Swim had only finished six days previously. “Look around and you will find literal superheroes – people who remind us that the human spirit knows no boundaries.

I’ve had the good fortune to host more than a few such specimens on this podcast – people like Alex Honnold. James Lawrence who completed 50 Ironmans in 50 states in 50 days. And Colin O’Brady, who, as we speak, is attempting to be the first person to cross Antarctica unaided.

And then, there’s Ross Edgley – a gentle, beautiful beast of a man who recently became the very person to swim the entire circumference of Great Britain without once stepping on land. It’s a journey that took him 1,792 miles over 157 days, eclipsing several world records in the process – including the world’s longest stage sea swim.

And yet this just the latest feat for Ross, a UK-based strongman and adventure athlete of otherworldly grit and determination whose insane feats of strength and endurance include:

* climbing the height of Everest on a rope in one sitting;
* completing a marathon while dragging a Mini Cooper behind him;
* completing a triathlon with a 100 pound tree on his back; and
* swimming 100 km in the Caribbean whilst pulling a 100 pound log behind him – which he completed in just 32 hours.

Ross has chronicled his adventures as a fitness expert for magazines like Cosmopolitan, Men’s Health, GQ, The Daily Telegraph and Men’s Fitness and is a Sunday Times Bestselling Author of the aptly titled, The World’s Fittest Book.”

Listen to the Rich Roll podcast with Ross Edgley here.