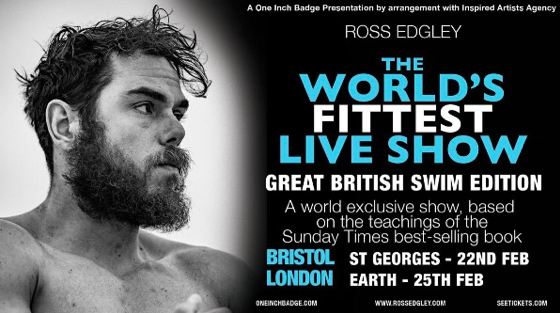 After rocketing to global fame with his 157-day, 209-stage 2,884 km assisted stage swim around the coastlines of England, Wales, Ireland and Scotland in his Great British Swim that culminated on Margate Beach on November 4th, Ross Edgley is now heading onto the World’s Fittest Tour.

Edgley said, “I am beyond excited to announce the dates and locations of The World’s Fittest Tour. Based on the teachings of the No. 1 Sunday Times Bestselling The World’s Fittest Book we’ll be, performing live sports science experiments on stage, explaining how these principles were used to complete the first 2,000-mile swim all the way around mainland Great Britain, and showing unseen footage of The Great British Swim as I share secrets of the ship, swim and sea that were never broadcast publicly.”

He explained, “Basically, from Bristol to London my goal is simple, to ensure every audience member leaves equipped with the tools needed to become a stronger, faster, leaner or more resilient version of themselves in 2019 and beyond…“

To learn more about the Bristol tour stop of the Great British Swim edition on February 22nd 2019, visit here.

To learn more about the London tour stop of the Great British Swim edition on February 25th 2019, visit here.