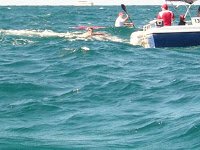 In a nod to safety in the marathon swimming world, the Rottnest Channel Swim will (1) announce all shark sightings during the race, and (2) after the shark sighting is announced, support boats near the shark are permitted to pull swimmers out of the water immediately if they believe there is a threat to swimmers.

Previously, only large sharks that were deemed a direct threat to competitors were announced and smaller sharks were ignored if they weren’t considered a threat. If any skipper, helicopter pilot or support boat sees a shark during the race, the shark’s presence will be announced and the position of that sighting will also be informed to all personnel and teams.

Prompted by a number of fatal shark encounters in Australia, David and his committee opted to be safe, conservative and cautious. “The support boat skipper and crew will judge the shark threat by its species, size, behavior, direction and proximity to swimmers.” If a shark is identified, swimmers can be pulled from the water without threat of disqualification.

In the traditional marathon swimming world (outside of the Cook Strait whose rules allow for a 10-minute boarding of an escort boat in case a shark is in the vicinity of a swimmer), even if a shark is seen or approaches a swimmer and the swimmer is temporarily pulled from the water, the swimmer is immediately disqualified. Even before the days of Greta Andersen who was disqualified in the Molokai Channel in the 1950s when she was surrounded by sharks, the traditional rules of marathon swimming has been strictly enforced – touch a boat or person, no matter if the situation is shark-related, and the swim is immediately over.

Under the new rules and safety precautions, the 2012 Rottnest Channel Swim will be held on February 25th.