Rough And Risky In Force 6 Conditions In Kenting, Taiwan 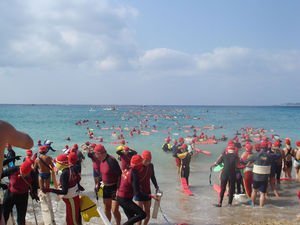 The China Post and the United Evening News reported that 7 swimmers were hospitalized (with 2 in serious condition), 1 swimmer died, and 168 swimmers were stranded 800 meters from shore in Force 6 conditions as the result of swimming against adverse currents in the 2013 Olympic Hengchun Open Water Swimming event in Kenting, Taiwan.

Fatigue and hypothermia were the culprits in an annual event that regularly attracts 4,000 participants each year. But a quick decision to stop the race before all 4,000 swimmers entered the water undoubtedly help limit the emergency situation.

“No matter how hard I tried, I could not swim back to the shore against the strong ocean current,” said Cheng, an experienced swimmer interviewed by The China Post’s Joy Lee. Cheng said the current kept pushed swimmers off-course as many older swimmers and children started to wave their swimming caps as they called for help. The event was cancelled after 2,000 swimmers had started the event as rescue personnel on boats and Jet Skis, firefighters and the Hengchun Coast Guard staff rescued those in the water.