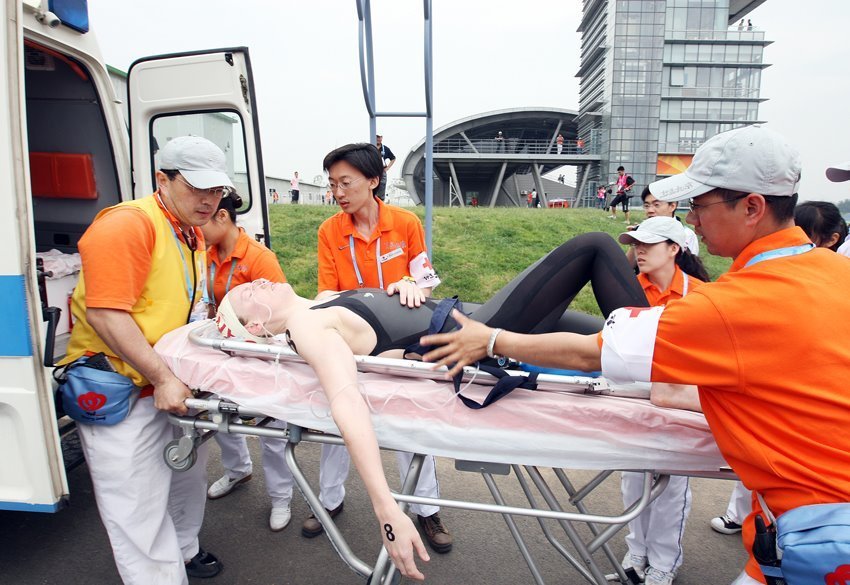 Courtesy of WOWSA, Huntington Beach, California. The competitive career of Karley Stutzel unexpectedly and inexplicably collapsed during the last loop at the Olympic 10K Marathon Swim qualification race in Beijing in 2008. The Canadian professional marathon swimmer never had her world fall apart before like what happened at the end of the 10 km swim at the Shunyi Olympic Rowing-Canoeing Park. “I don’t even remember the last loop at all,” said Stutzel who had been a stalwart on the FINA World Cup and Grand Prix circuits for years. “My coach said I just stumbled and collapsed when I got out of the water and struggled up on the dock. I have swum in much colder waters for longer. I don’t know what happened.” Fortunately, Stutzel quickly recovered and, although disappointed, she moved on. But her experience is another example of how the unexpected can be expected in the open water. Even the world’s fastest, most experienced, most fit, and most acclimated swimmers face unique risks in the open water world. Muhammad Ali once said, “Champions are made from something they have from deep inside them – a desire, a dream, a vision. They have last-minute stamina, they have to be a little faster, they have to have the skill and the will. But the will must be stronger than the skill.” That drive is what can lead to swimmers competing until they collapse. Des Renford and Kevin Murphy battled each other and Mother Nature in Loch Ness… until they both found themselves in the hospital together. Ted Erikson was pulled from the Pacific Ocean – apparently lifeless – during his second attempt to swim from the Farallon Islands to the Golden Gate Bridge. His wife was informed of his death from his escort boat, but he fortunately not only came back to life, but also he came back later to make a successful crossing in 1967. Ron Collins in the Catalina Channel, Larisa Ilchenko in Lac St-Jean at the 2010 FINA Open Water Swimming Championships, Rendy Lynn Opdycke in a rowing basin at the 2005 FINA World Championships in Montreal, Kate Brookes-Peterson in the Mediterranean Sea at the 2009 FINA World Championships in Rome, Antje Mahn in a sheltered sea venue at the 2011 FINA World Championships in Shanghai, Natalia Charlos at the 2014 European Championships. The list goes on and on about elite and experienced swimmers who have had to be rescued and subsequently hospitalized due to a variety of conditions and situations in open water swimming competitions. 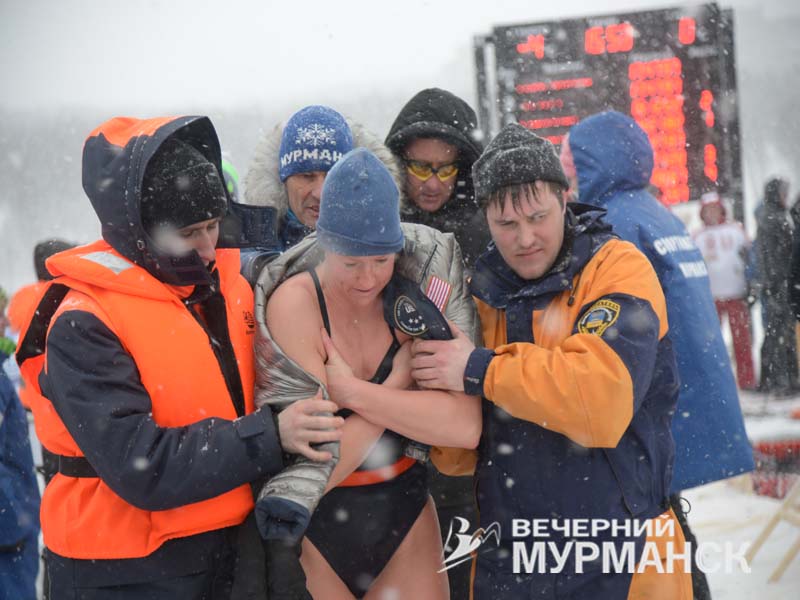 At the upcoming Big Chillswim Winter Swimming Gala in Windermere, support staff, seconds, spotters and lifesavers are experienced and knowledgeable about the dangers of rough handling a hypothermic swimmer. “Gentle handling [of the distressed swimmer] is the recommended practice,” explains Nuala Moore, an ice swimmer and Emergency First Response Instructor. “Once the body becomes hypothermic, the heart can become fragile and when a swimmer is being assisted post swim in a rescue, any movement that is speedy and rough could be detrimental to the swimmer. One of the major challenges to a hypothermic swimmer is post-rescue collapse. Rough handling is listed as a contributory factor to post-rescue collapse. So many other variables can contribute, but this is one we can immediate effect positive on. People new to rescue or close to the swimmer often respond with their own nervousness or fear. In doing that, they can try to walk or carry the swimmer faster than the swimmer’s body can respond. This increased workload can stress the swimmer. A cold heart can often be very slow and the breathing can be down to 6 breaths per minute – more than half of the normal – so when the heart is cold, the heart is what we call excited or jumpy and the swimmer needs to be maneuvered very gently for 2 reasons: 1. If the heart is stressed at this moment by rushes of blood into the heart, it may cause an arrhythmia. 2. Hypothermic swimmers can be slow to respond for obvious reasons. So teams moving and even speaking too fast can equally stress the swimmer. So gentle handing but still recognizing the need for efficiency and understanding is the challenge of recovery. The term rough handling is used in a way that can be recognized about the importance of gentle handling. A safe outcome is our goal.” Upper photo by Pei Qingsheng shows Karley Stutzel of Canada being rushed to the hospital after the Olympic 10K Marathon qualification swim in Beijing in June 2008. Copyright © 2008 – 2015 by World Open Water Swimming Association