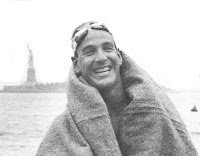 In 1979, the first person to attempt a double around Manhattan Island was George Kauffmann.

In 1980, International Marathon Swimming Hall of Fame inductee Tom Hetzel made another attempt, but the first person to complete a double was Julie Ridge in 1983 in over 21 hours. A year later, Ben Huggard also completed a double, but Julie retained her record.

Stacy Chanin became the first person to complete a triple around Manhattan Island in 1984 in a time of 33 hours and 30 minutes, but the organizers discouraged multiple circumnavigations because of the logistics and risks involved with boat traffic on the waters.

In 2007, Marcos Diaz did an exhibition double around Manhattan Island that took 22 hours and 14 minutes, but he was wearing a wetsuit. A month after Marcos’ double, 50-year-old International Marathon Swimming Hall of Fame inductee Skip Storch (shown above) swam a triple that lowered the double record to 20 hours and 56 minutes and the triple record to 32 hours and 52 minutes.