Round And Round Ray Gandy Goes 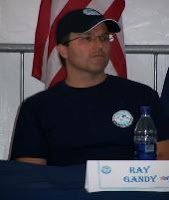 Ray described his swim to the International Marathon Swimming Hall of Fame, “The plan was to generally follow the tide down and up the sides of the island. There were times I swam with the tide and other times I did not. The first three hours we hit a very difficult 15-knot head wind with three-foot head seas between the Dumplings and Beavertail. Then, near the end, on Saturday morning, coming south after passing Conanicut Point, we had to buck a current of about half a knot and a head wind of nearly 10 knots. Having been in the water for over 18 hours, the last two hours were very tough swimming into the current and wind.”

Ray was well-fed and hydrated as he quickly took various combinations of the following every 30 minutes: Hammer’s Perpetuem, Hammer Gel, bananas, Gatorade, coffee, doughnuts, hot chocolate, water, peaches and peanut M&Ms. “My feeds lasted generally 30 seconds and I used a mouthwash rinse after each feed to prevent any mouth or tongue issues along the way. I averaged around 400 to 500 calories per hour – adding up to around 10,000 calories consumed.”