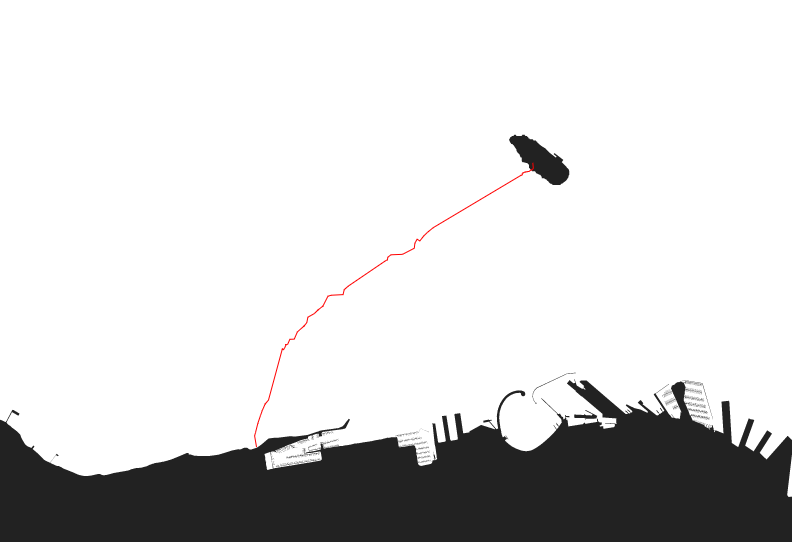 Route distance is the shortest straight-line tangent distance from start to finish, either on a point-to-point course or in a geometric course. Conversely, the track distance is the distance that the swimmers actually traverse over the course.

For example, English Channel swimmers traverse an official 33.8 km distance between England and France regardless of where they start or finish or how much they are pushed off-course by currents, winds or waves. However, the track distance is the actual distance the swimmer travels from start to finish.

For solo channel swimmers and professional marathon swimmers, their track distance is always further than the official route distance.

Zach Margolis created an illustration of his course from Alcatraz Island to Aquatic Park in San Francisco Bay above. “Almost every Wednesday, the Alcatraz Swimming Society swims Alcatraz in one direction or the other.

We swam to Alcatraz…there was a very strong flood in to the bay, so we left from Yacht Harbor in the Marina, swam directly north, and got pushed right to the island
.”

Some swimmers claim and many media reports state the track distance instead of the route distance, especially across the English Channel and other major marathon and channel swims around the world. Often, these reported distances are longer than the accepted straight-line (route) distance accepted by the global open water swimming community. Sometimes much longer.

Munatones explains, “No one can swim perfectly straight from point to point due to imperfect swimming technique, currents, tides, waves, surface chop, swells, fog, poor visibility and other factors. Fortunately, with modern-day GPS technology and handy tools like Google Earth, measuring a course has become both convenient and accurate.

Plain and simple, swimmers go off-course. But the global open water swimming community stresses and accepts that the straight-line tangent is the standard form of measurement in their sport.“

Chris Guesdon of the International Marathon Swimming Hall of Fame reiterates, “Straight line point-to-point is the only way to measure all swims. It is irrelevant where the wind, tides or currents take the swimmers. The question should always be, ‘Did you complete the task, starting point to finishing point, and how long did it take?’ An English Channel crossing is the best example. It’s England to France, without assistance, with an independent observer [to verify the swim].”

John Dussliere, a 2008 Olympic swimming coach, agrees, “Straight line tangent is the only way to standardize the distance. Otherwise, swimmers would have to follow another swimmer’s path in order to beat their time and set a record. Marathon swimming is about braving the elements and the swimmer’s ability to time the currents, navigate and handle the elements that can be measured against others.”

Liz Fry, race director for the Swim Across the Sound and a Triple Crown swimmer explains other perspectives, “The straight-line tangent distance is the most normalized measure of the distance, similar to sailboat races. Speed is gained by adding distance and ‘tacking’ into the current/tide. The sea conditions, currents, tides and weather are all part of the sport and need to be planned for as best as possible. GPS provides interesting data for the swimmers and their pilots, but I see it more as a navigational tool during the swim for real-time adjustments based on swim conditions and swimmer speed [rather than a means to measure the distance of the swim]. If the search is for actual swimming distance, it will be complicated since consideration would have to be given to both horizontal and vertical distance. We would need to find a method to account for wave height in the distance as well.”

Jim Barber, another Triple Crown swimmer, brings up another complication, “Measuring point A to point B is the way to go. We can’t start measuring what a swimmer swims in total distance because this becomes way too subjective for readings and measurements.”

Captain Tim Johnson, an inductee in the The History of Open-Water Marathon Swimming, agrees and brings up a different point about land-to-land and staged swims. “The straight line distance should be used unless there is a land mass that a swimmer or boat would have to deviate around in which case it would be the shortest swimming distance going around the deviation. If a swimmer starts or finishes from an in-the-water point, I could consider a swim where the start or finish was located in the water adjacent to land where adjacent means within sight and hearing of spectators.

Using a navigational buoy is a useful substitute because they are marked on charts. GPS is great for finding locations and I used it on Skip Storch’s swim down the Hudson River which was a staged swim. Skip would pick up his swim from a point behind where he left off the previous stage (day) and use GPS to mark the finish of a stage in order to use for resuming the swim the next time. GPS uses a reference to an imaginary grid laid over the earth and, as such, there are an infinite number of locations. The issue with records is they have to be repeatable so another person can attempt to break a previous record so the starting location is key. Before GPS there was Loran, but no one used or claimed a record based on Loran readings as far as I know.”

In summary, governing bodies, swimmers, coaches, administrators and media representatives should use the route distance measured in kilometers, statute miles or nautical miles. Using any other means of measurement simply confuses the situation.