A Royal Time During The Round Jersey Relay 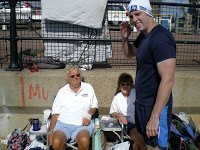 Charlie Gravett, Vice President of the Jersey Long Distance Swimming Club provided the following report on the Round Jersey Relay.

The Round Jersey Relay was a charity event – 3 years in the planning – on behalf of Holidays for Heroes Jersey, a charity that brings wounded servicemen and their families to the beautiful, mystic Channel Island of Jersey.

Over 15 vessels jockeyed for position as the 5 begoggled lead-off swimmers lined the wall at the start. “Led by Ross Angel, a well versed kayak escort pilot and his two daughters, we cleared the small-roads as he led the flotilla through the rock strewn narrow gap of the reclamation site and ‘Dogs Nest’ group of rocks,” described Gravett. “Then into Greve d’Azette Bay and across to Green Island a Neolithic tomb hanging on the very southernmost point of Great Britain.

The Royal Air Force and Army teams raced off into the distance, closely followed by the Jersey squad with the four-man U.S. Air Force squad and Battle Back team. Green Island was the marker for the first hourly take-over as all five teams settled down into the business over the next 39 miles
.”

The teams had a superb run to the north of St Catherine’s on the northeast corner of the Island. With Battle Back’s swimmer travelling at over six knots as reported by the GPS tracker, they moved into a great position to line up with the near 200-foot deep trenches which aid progress along the north of the Island. As swimmers speeds rose so did the wind and wave heights.

Wind strengths were a northwest Force 4, possibly Force 5 winds against tide. “Not a lot of fun for all concerned, but giving that hint of old sea-dogs with ‘years before the mast’ on possibly one of the old ancient craft of the tea clippers. I raise my weather beaten cap to the courage and tenacity of both swimmers and kayakers who resolutely stuck to their ‘fun-fair’ ride. Grosnez was as good as ever and livid up to its bellicose history,” reported Gravett.

The Royal Air Force, Army and Jersey Long Distance Swimming Club teams had forged into the lead. The U.S. Air Force quartet, led by Colonel Timothy Lawrence (shown above), was swimming in a 4-person shift compared to the other 6-person teams. “The long west coast lasted an eternity with the wind on ourstarb’d quarter making navigation and holding station a little tricky and the poor man/woman in the water at the time was constantly making corrections to make location with their particular escort vessel. As we approached the southwest turn news came in that the Royal Air Force and Army were closing on the finish together.”

£35,000 was raised for a cause close to the hearts of many of the participants who finished as follows: