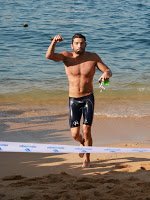 Sold Out…that is what is happening at most big city marathons – very similar to races like the Great Swim in England, the Manhattan Island Marathon Swim in New York, the Rottnest Channel Swim in Western Australia, the Great Chesapeake Bay Swim in Maryland and the Acapulco 5k International in Mexico.

Even during – or perhaps because of – the global recession that is negatively impacting business, investment and economic activity, marathon running and marathon swimming are growing. Sold-out event and record fields in both sports are becoming more commonplace, both for new events and established events. From the famous Boston Marathon and New York Marathon to the well-known La Jolla Rough Water Swim in California and the Traverssia dos Fortes in Brazil, athletes are learning to get their applications in early.

Running USA gave several reasons for this marathon mania including:

1. a response to the bad economy (e.g., relieve stress, more time to train for some, etc.)
2. training for and running a marathon is something that one can control unlike the stock market or the economy
3. positive, feel good energy surrounds marathon preparation and race weekend
4. well-organized, fun events
5. the challenge of 26.2 miles – a greater sense of accomplishment for many during bad economic times.

There are also similar trends between open water swimming and triathlons. Both, in a way, are getting soft as they are growing larger.

While triathletes famously and publicly train like Olympians, watch their diets and acquire the latest in equipment, technology and coaching services, the sport is growing quietly at the shorter, easier end of the endurance scale. Instead of the legendary Ironman – 2.4 miles of ocean swimming, 112 miles of cycling against tropical winds and 26 miles of pounding lava-hot pavement under scorching skies, the number of shorter sprint triathlons has tripled within the last five years.

Similarly, as the number of channel swimmers increases dramatically, the number of 1 mile and 1K open water swims is increasing at an even faster rate. Same as the growth of kid triathlons, relay triathlons and events that allow contestants to run less than two miles or swim with the aid of a Styrofoam noodle increase, the growth in open water swims around the world that allow wetsuits is expanding quickly.

What happened to the hard-core triathletes who strained and sacrificed to reduce their body fat under 5% or who pushed themselves to exhaustion? The same thing that happened to swimmers who trained over 10,000 meters per day and swam so hard they had shoulder injuries.

They were joined by others who simply participate for the fun, camaraderie and health of it.