Ryan Lochte Doubles Up In The Open Water 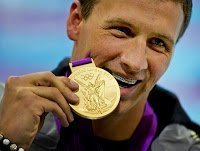 During the Olympics, Ryan Lochte is justifiably receiving a lot of attention on the television, in the online social media, newspaper and general conversation.

One memorable AT&T television commercial showcases Lochte swimming in the ocean. It is an outstanding piece that were filmed in various bodies of open water.

But Lochte was too busy training twice or three times a day to shoot all the clips shown in the commercial.

His stand-in was U.S. Masters Swimming Marketing Director Kyle Deery who swam at the University of Florida where Lochte was an NCAA champion. The personable pool swimmer who is indistinguishable from his friend Lochte and is an excellent body double. But Deery explains what scenes he appeared in, “The majority of the shots that were beyond the 12-second mark were myself and all the ones that were close-ups, obviously, were him. Anything that was in the open water was myself.”

But most of the ocean scenes were actually filmed in a pool where waves and turbulence were caused by barrels placed along the sides of the pool. The ocean scene was created by a green-screen on one side of the pool with a black tarp on the pool bottom.

The magic of film-making is only equaled by Lochte mastery of swimming fast.