Photo courtesy of Caleb Bjergfelt.  Story courtesy of Selene Brophy, Cape Town, South Africa. First, there was Theodore Yach , then there was Ryan Stramrood. Both men have now completed a Century Swim between Robben Island and Cape Town in South Africa.  100 times (108 times in the case of Yach), they have completed at least a 7.4 km crossing between the former prison island and the South African mainland. Similar to Gary Emich and Steven Hurwitz (between Alcatraz Island and San Francisco), Dr. Lucky Meisenheimer (across Lake Cane in Orlando, Florida), Bill Welzien (in Florida’s 20.1 km Swim Around Key West) and Sarah Thomas (in her 168.3 km swim in New York’s Lake Champlain in 56 hours 5 minutes) Stramrood, a renowned ice swimmer and an ocean advocate, now has another feather in his well-worn swim cap with a 2 hour 18 minute Robben Island crossing on May 23rd. Stramwood honored his 7.4 km swim to his good friend and swim buddy Yach, “I trained with him often and swam a number of Robben Island crossings with him, including his 100th. Theo swam my 50th crossing with me in 2015 and would have joined me on my 100th today.  No Robben Island Swim is ever easy. Today was my 100th and I’ve made it. It was tough out there, it was cold and it got choppy, so I am very very happy.”
Stramwood started his adventures from Robben Island starting in 2003 and was escorted by another South African ice swimmer and ocean advocate, Lewis Pugh on his Century Swim.  Pugh commented, “It’s an incredible achievement to swim 100 Robben Islands. I have been swimming for 32 years and I have never done an easy Robben Island, never once, and he has now done 100 [times].  The thing about Robben Island is that it’s always unpredictable: you think you are going to do two hours and conditions change and it takes three hours; you think you will take 3 hours and it becomes 5 hours. It shows Ryan has got real mental fortitude and vasbyt.”
Andrew Chin of the Cape Long Distance Swimming Association ratified the Century Swim that Stramwood uses to raise awareness of the dangers of single-use plastic landing up in the oceans as an ambassador of the South African Sustainable Seafood Initiative.  Stramwood explains, “Plastic water bottles, individually wrapped fruit/muffins, branded plastic gimmicks for delegates to take home, this all has to end up somewhere and from my swims, I have seen my fair share of plastic waste that has landed in the ocean.” 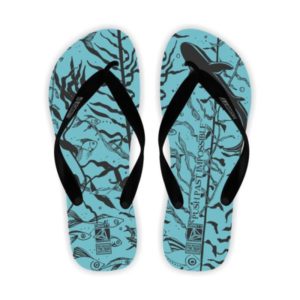 True to his typical selfless nature, Stramrood is helping others as he reached a swimming goal with his Ryan Stramrood Got GRRiTT Collection.  Together with GRRiTT, a company that makes slippers out of used car tires, profits from the sale of the first 100 pairs of these flip flops are being donated to Arafat Gatabazi. Gatabazi is a refugee from the Congo, who hitchhiked to South Africa when he was 17 years old and now teaches Cape Town children to swim. Visit here to purchase the flip flops. Visit here for a related article on the Ryan Stramrood got GRRiTT Collection. Copyright © 2008-2019 by World Open Water Swimming Association