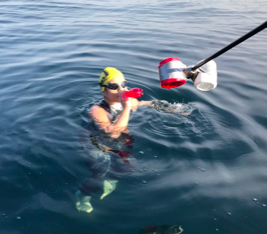 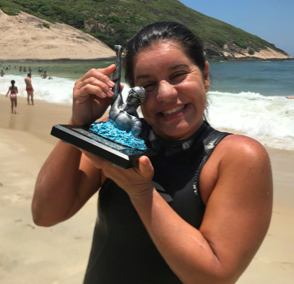 Adherbal de Oliveira reports, “The challenge is around 36 km and full of natural beauty, where the swimmer can admire from a privileged angle, the beautiful landscapes of Rio, such as Sugar Loaf, Leme Beach and Copacabana, Christ The Redeemer, Cagarras Archipelago, Arpoador, Ipanema and Leblon beaches, Pedra da Gávea, São Conrado beach, Niemeyer coast, Barra da Tijuca beaches, Reserva e Recreio and Pedra do Pontal, near the end of the adventure.

Sabrina began her crossing at Leme beach at 1:00 am in the still dark with a calm wind, sea with southernly undulations in 20°C water at a strong pace at 64 strokes per minute. However, beginning during the fourth hour, she had to swim against the current, sapping much of her strength as she aimed to advance towards Pontal.

Sabrina remained physically and mentally strong throughout the crossing even as she had pain in her shoulders. After struggling to overcome night swimming, shoulder pains, oncoming currents and jellyfish, Sabrina completed the Travessia do Leme ao Pontal near noon on December 11th in 11 hours 21 minutes.

At the end, a very emotional Mazzola said, “I dreamed the whole year of this moment of arrival. It was a crossing with many adversities, but it was most beautiful and unforgettable.”

In recognition of her achievement, the Leme to Pontal Swimming Association gave her the exclusive and lifetime number LPSA SOLO #09.