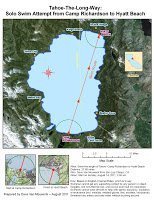 Not only must the 42.48-mile swim be done at an altitude of 1,897 meter (6,225 feet), but a solo swim of this magnitude must be performed in cool water (under 59°F or 15°C) and freezing (literally) air temperatures. A double-crossing at 42.48 miles must necessarily be done at least through one full night where the temperatures can dip below 32°F (0°C).

Even if a fairly fast 2 mile per hour pace can be maintained for 42 miles at altitude throughout the swim, a marathon swimmer must be able to swim as they stroke their wet arms through freezing air temperatures.

Such a swim would require a frankly superhuman effort where the swimmer would have to be well-trained and well-acclimated with a steel-trap mind and a spot-on operational and safety plan.

A possible safety plan would include knowledge of evacuation points along the lake (where the swimmer can be driven to shore and placed in an ambulance) as well as emergency medical locations at various points (from the south end to north end of the lake). Transport to quality medical care of the distressed swimmer would have to be via boat until shore.

Because of the possibility of hypothermia, medical equipment and qualified medical personnel would be part of the safety team as well as constant radio and mobile communications, from an AED defibrillator and GPS system on board.

Fortunately, mobile communications throughout the lake do not seem to be a problem.

A boat that is easy to get the distressed swimmer onboard is critical as are items such as a lifeguard rescue tube, fins and underwater lights, just in case the swimmer goes below the surface at night. Auxiliary watercraft would also be helpful, but a paddle board is significantly easier for most people to help a distressed swimmer with than a kayak.

The safety personnel onboard or on a paddle board should be outfitted in a wetsuit in order to jump in at any time. No time should be lost to get out of one’s clothes and then change into swimwear.

If the swimmer completes the swim, warm clothes, warm hat, socks, booties, gloves, sleeping bags and warm fluids (prepared in a cup with a drinking straw and covered lid) are essential.

Plenty of glow sticks and a strong disc light on the swimmer’s swimsuit and swim cap are essential as are lights on the boat so both the swimmer and crew can be in constant view of each other.

Communication during frequent, but quick, feeding stops would be advisable so the crew can confirm his mental acuity by asking the swimmer questions such as ‘What is your zip code?’ and ‘What is the name of your high school?’.

For such a swimmer of such magnitude, the crew needs to be just as on top of their best game as does the swimmer.

James Jonsson attempted to swim across Lake Tahoe, but hit some frigid weather in August. “I attempted Lake Tahoe when the weather started off at 32°F (0°C) with a light southerly wind. I started at Camp Richardson on the south shore and started my trek northward to Incline Village. Two hours into the swim the winds switched and blew from the north at a hard 25+ mph. It blew so hard that at each feeding stop, I went backwards 50 feet in only 60 seconds. After 12 miles, I called it off; my kayakers were being swamped and some of my boat crew were getting seasick. Next year, I will be back with a one week permit so I can be flexible with the weather.”

Given the altitude, the distance, the cool water temperatures, the freezing night air temperatures and the winds and resultant surface chop, a double-crossing of Lake Tahoe under English Channel rules would surely rank among the world’s most difficult marathon swims of all time.