Safety Standards In Cancun At The FINA World Cup 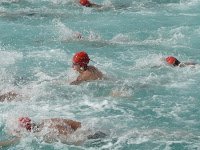 What happens before and during a FINA 10KM Marathon Swimming World Cup? Open Water Source takes you behind the scenes: During the pre-race technical meeting with Ivan Torres, the local race director of the FINA 10KM Marathon Swimming World Cup (Copa Mundial de Natación FINA Maratón 10 km) in Cancún, issues ranging from athlete safety and local promotions to VIP and spectator viewing were discussed.

Regarding safety, the athletes will swim 8 loops in the 10K course with 3 boats serving as feeding stations. The athletes will be protected by a variety of governmental and professional staff including the Mexican federal government authorities with its 10 kayaks and 2 scuba divers. The safety net also includes the local Mexican government authorities with 2 Zodiac boats and 2 divers, the port authority will utilize 2 boats with 4 crew, an ambulance will be on stand-by and an emergency plan is formulated to transport athletes to the nearest hospital in case of an emergency.

A paramedic and 2 rescue boats from the national park services are available as well as 10 staff from the Wildlife Association of Mexico including 2 paramedics and 5 kayaks. One boat and a GPS surveyor from the Marina El Manglar are being provided as are official boats for the FINA race officials (FINA Head Referee and the FINA Assistant Referees as well as a Jet Ski each for the FINA Delegate and the FINA Safety Delegate. Everyone will be in communication via radios including the FINA Safety Officer.

In a tight course where the longest leg is only 475 meters and there are 8 loops in the 10K race, the number of safety personnel is satisfactory and all the 41 athletes should be in view of someone official along the course.

The safety personnel are experienced because they also do several annual local amateur races in the Cancun area.

Additionally, the event will be broadcast in Mexico via TV Azteca and TV Cun, an affiliate of Televisa. Quintana Roo State Governor Roberto Borge will be in attendance as will spectators who can view the course from the shore or from their hotel rooms lining the course.