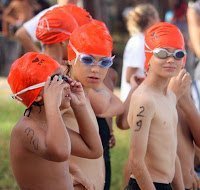 One of the longest ongoing ocean swims in the Pacific Ocean continued on its tradition for young open water swimmers this past weekend. The 34th annual Saipan Swim Club Ocean Swim was held in the warm waters off the Saipan World Resort where age-group swimmers from Saipan and Guam participated in four different distances.