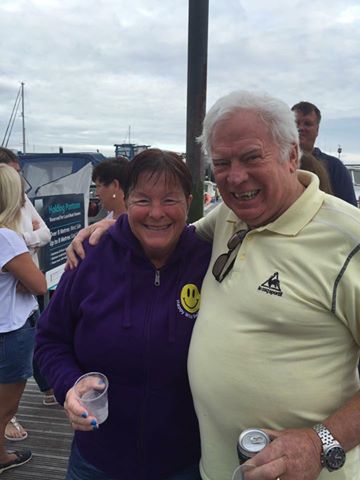 In 1992 as a 35-year-old, Sally Minty-Gravett, M.B.E. first swam around Jersey Island in 10 hours 47, becoming the eleventh individual to complete the 66 km circumnavigation.

“Her swim wasn’t actually initially planned as a Round Jersey Solo, but as a 10-hour training swim. As her pilot, I spoke to her at the 10-hour mark and jokingly said, ‘You’re well past Corbiere, shall we carry on to the end?‘” recalled her husband/escort pilot Charlie’ Gravett.

“That was intended as training for her third Channel solo later that year which she [later] completed in 12 hours 8 minutes.”

The indomitable woman is in hard training again; this time for a two-way English Channel crossing at the age of 59. Fellow Jerseywoman, Wendy Treihou, completed a two-way feat in 2013 in 39 hours 8 minutes, but it has only been completed by 41 individuals in history.

But she doubled her 1992 feat with another massive training swim.

“Sally planned on two Round Jersey swims within three days in preparation for her 2-way Channel attempt,” reports Gravett. “Initially she’d hoped to make the two [circumnavigation] swims back-to-back; however, crew logistics decided on a 3-day schedule. On Friday, she completed her first of the two circumnavigations in 10 hours 36 minutes, piloted by Mick Le Guilcher and ably assisted by Adrian Follain and Bianca Kempster.

Sunday was a little more gentle with Mick on again as her gallant pilot and Bianca as crew which includes Martin Powell on kayak and at the helm and Graham Lowe as general aid and to assist in feeding our heroine. The weather forecast was a little poorer than two days ago with fog patches; however, the wind remained forecast at a welcome 9 knots F2. But there is a little more swell than the previous outing with improving sunny periods to cheer them along.

However, almost straight from the start after passing through the ‘reclamation passage’, the chop began and was to last, increasing to a decent F4 around the top of the Island through until they rounded Grosnez. Visibility was proving a bit difficult with the sea mist and the increase in wind speed around the top of the Island which made forward progress slower than expected. However, Sally and crew survived to enjoy a much more pleasant run down the west coast.

They rounded Corbiere for the run in with wind and an increasing tide behind them, and to crown a superb two days of swimming, they were joined by a pod of dolphins accompanying them into St Aubin’s Bay. Sally’s time of 11 hours 10 minutes cemented her position as Jersey’s premier female swimmer. Altogether, it was a very long, but memorable, weekend.