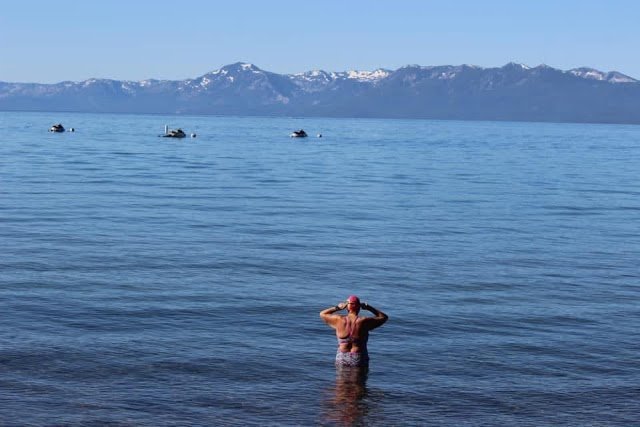 Sally Minty-Gravett, MBE swam at the highest elevation of her five-decade marathon swimming career when she completed a hour minute crossing of Lake Tahoe at 2,300 meters.

She explains, “Last week, I was in Lake Tahoe, California. Initially I was asked to go and support Prabhat Koli in his bid for his California Triple Crown. He swam the Anacapa Channel in early July; he did a Catalina Channel crossing; and he was scheduled to cross Lake Tahoe.

When I was asked to attempt Lake Tahoe, I thought as I was travelling that far, why not? So, I was fortunate to meet Sylvia Lacock and Bryan Temmermand of the Pacific Open Water Company and swim the 10 km Golden Gate Bridge to the Bay Bridge via Alcatraz in November last year with them and other swimming legends. So I chatted with them about logistics and availability and booked my swim after that.

Training ensued and come July 25the, the time came to travel over. I flew into San Francisco on July 26th. I stayed with friends Steven Breiter and Carol Breiter who hosted me and took me up to Tahoe. This was Prabhat’s 20th birthday and he was due to start swimming that evening.

The first impression I had when I saw California’s Blue Jewel was just how vast and massive it is, an ocean in a lake I thought. But I would be able to see it unfold during Prabhat’s swim. Lake Tahoe is way bigger than Jersey where I live to put it into perspective.

Drove to the start on the South Shore at 7 pm for an extensive briefing on the dock with Bryan and Sylvia. Sean would also be on board as our observer. We set off just after 8 pm to get started. Prabhat jumped in at about 8:15 pm to get started at 8:20 pm. It was a beautiful evening and the sun was about to set. They start the swim at night to finish in the mornings before the winds come up every afternoon. Plus, there are many pleasure boats on the lake in the daytime.

Prabhat started well, first feed good. Then he had a second feed when he asked for painkillers. This was not a good start and I had never seen this: his left shoulder had gone. So just over 3 hours, he decided to come out due to his shoulder. It was the correct decision in order to save further injury.

The night skies were incredible. I saw the Milky Way, North Star, Big Dipper and shooting stars. It was amazing and was so clear with the black night as a backdrop. But we got Prabhat out and dressed, and returned to the dock.

Then, we had the worst drive back in the dark, tired and without my glasses, but we made it and went straight to sleep. The next morning, we talked it all through – and now it was my turn to start preparing. I was due to start on Wednesday evening of the 31st. I went and got all my good food supplies with lots of good proteins, and vegetables with potatoes, etc.

I had a couple of little swims on the Monday and Tuesday, plus a good massage before I swam. I had a sudden crew change on swim day, poor Amy Appelhans Gubser could not make it after all, so Steve offered to step in along with Prabhat Koli – and Carol would also come up to help out with transport and other things. Ranie Pearce came up to be my observer. My nerves were kicking in big time, but I got to start resting at lunchtime on the Wednesday.

I got down to the start early. The briefing was done and dusted early. I ran though all my feed plan with everyone and we got going to the start early. It was much breezier tonight, but not unduly so. Bryan started playing Eagles’ ‘Hotel California’ for me as we motored to the starting place. The splash time ended up being about 8:10 pm and I was off. I will highlight how tough this swim turned into.

The water was circa 20°C. It was the warmest on record. Before I arrived, my biggest worry with this amazing venue, was the night time temperatures. It is still a ski resort and there is snow still on the mountains. But as it transpired, the water temp never bothered me at all.

Night swimming has never bothered me either. Prabhat has said it was tricky focusing on the boat, so I had asked for a couple of extra glow sticks on the side of the boat that really did help. However, my new tried-and-tested goggles started fogging up immediately. They did not help at all as I kept having to rinse them. I was due hourly feeds until day break so I just got on with it.

The night skies did not disappoint, yet again. I know at some stage, I changed boat sides as the wind was from the west, but that change created more issues with fogging goggles and darkness. I few close calls with the boat on my part. It was tricky staying a safe distance, especially as I was getting tired into the swim.

So I think that when daybreak broke, and I changed my goggles which made a big difference and changed back to the port side as the wind had stopped, but then, I had a coffee as requested. But it didn’t stay down and from there onwards, the whole swim become a completely new one. I think it was from about 8 hours onwards. All my feeds did not stay down. I was so sick, uncontrollably so. It was horrid.

I had not had a chance or opportunity to see where the finish was. That was playing on my mind too. Nobody could or would tell me how far I had to swim and so it continued for a further 8 hours. Plus, when I could finally see the finish beach at Incline Beach, Bryan moved me to the starboard side so he could talk to me and guide me to the finish spot. I could now see Shilpa and Raju Koli and Carol waiting for me.

The sun was so hot too. I had no idea how long I’d been swimming for. It felt like 24 hours at least. Anyway, here I was. I stood up very slowly. It was difficult, rather like my 2-way English Channel finish when I lost all my balance. I walked in slowly, but surely and made a very undignified exit and fell up onto the beach. I immediately carried on throwing up for at least 30 – 40 minutes in the full sun.

I felt so rough. It was midday-ish with a swim time was 16 hours 17 minutes. I was pleasantly surprised with that especially how I felt right at that moment. We got some group finish pictures with everyone and then finally, I was assisted to the bathroom on my way to the car.

The throwing up continued and continued through the rest of that day and night and the next day when we travelled down from the altitude back to Sacramento where I could recover better.

Friday night was the last ‘throw up’ and I took myself to bed early to sleep through to Saturday which I did. I ate little and often that day and had a quiet day home. Sunday, I was improved a bit more and took the family out for dinner. Monday morning I woke up hungry, finally.

I left San Francisco on Monday afternoon for home after taking Steve out for a good lunch before I left. Steve and Carol were so good to me. I am forever indebted. I finally arrived home last night to my two boys, who were also very pleased I was home safely at last.

Would I do it again? No, but I happy to support. There are 2 – 3 shorter routes available. Who knows, maybe one day.

What did I learn? So much about how the body can go through so much and still achieve. In the words of Paul Hornyak who swam Lake Tahoe two days before me who also had a brutal swim, “Aloha and just keep swimming.” So true. I am delighted that I finished and thank everyone involved in any way at all.

Apparently, I am only the second British or European lady to complete this swim. Kathy Batts née Smith was the first last year. Also, I was the fourth Briton: Kevin Murphy and Mark Sheridan have also swum this..but, I am the oldest Briton so far.

The positives include no salt mouth, no chafing, no jellyfish and I did it.”

When The Tsunami Hit, Penny Palfrey Took Off

A Deep Dive Into The Ocean

Celebrate International Women’s Day With Against The Tides