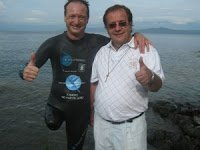 On April 22nd, Salvatore Cimmino swam from the island of Idjwi to Goma on Lake Kivu in the Democratic Republic of the Congo near the Rwanda border.
The always-energetic disabled swimmer swam an unprecedented 40 km across Lake Kivu as part of his A nuoto nei mari del globo (Swimming in the Seas of the Globe) project.
Cimmino was enthralled by his hosts who live on the shorelines of Lake Kivu, one of the African Great Lakes.
“Every moment on this strip of land was as wonderful as it is persecuted by misfortune, war, famine, poverty, disease and marginalization.” He was humbled and appreciative of the warmth and the affection that the local population showered upon him. The swimming amputee’s presence instilled hope and his fears of swimming across Lake Kivu vanished.
When he arrived on the island of Idjwi, the village was waiting for the Italian swimmers including a band and traditional dancers together with the entire community of people with disabilities living on the island. Even though his swim was plagued with a heavy rain, the lake remained tranquil perhaps by the weight of the estimated 1,500 cheering locals who created a gigantic flotilla around Cimmino in canoes, boats and ships. They cheered him from morning to his 5 pm arrival.
His swim engaged and enthralled many, but none more than those individuals with disabilities in Congo who are constantly discriminated against and marginalized with limited mobility. “Many people have to literally crawl because they lack even a rudimentary crutch. Girls are raped and humiliated all the time, often just because they are disabled,” sadly explained Cimmino. “I will fight so that the city of Goma and the island of Idjwi may be equipped with a rehabilitation center where children, teenagers, men and women are able to regain their dignity among a population stricken by war and poverty.”
Photo above shows Salvatore Cimmino with Father Paolo Di Nardo.
Copyright © 2012 by Open Water Source