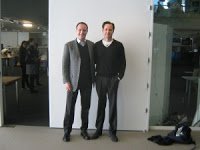 While open water swimmers accomplish the seemingly impossible in the water, it is often out of the water where they doubly shine as stars of society. Salvatore Cimmino, an amputee who has done numerous marathon swims across channels and lakes, is one such individual.

Salvatore Cimmino and Professor Hugh Herr of the Harvard-MIT Division of Health Sciences (shown below with Salvatore), and Technology Director of the Biomechatronics Group, and Professor Ken Goldman, Head of Industrial Liaison Program and Corporate Relations, met at MIT in Boston where the Italian disabled open water swimmer and the innovative entrepreneurial professors discussed the economic viability of providing prosthetic legs throughout the world.

When Salvatore returns to Boston in 2012 to swim in Boston Harbor as one stage of his Swimming in the seas of the Globe (A Nuoto nei Mari del Globo), a cooperative agreement will be signed. “My dream is that other major institutions will join the MIT and Selex Galileo and contribute with their competences which can determine a substantial improvement in the lives of disabled people and kick start a path of real integration.”

Salvatore’s supporters are growing and now include Intermatica, the Province of Rome, Stefano Testini and Vico Fabbris.